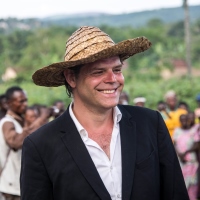 Renzo Martens (1973, Terneuzen) studied Political Science at the University of Nijmegen and art at the Royal Academy of Ghent and the Gerrit Rietveld Academy in Amsterdam. He became known for his provocations, such as the much discussed “Episode III: Enjoy Poverty”, a documentary that suggests that the Congo market their poverty as a natural resource.

In 2010 Renzo Martens got approved as an artist-in-residence at the ISCP program in New York and initiated the Institute for Human Activities (IHA) that postulates a gentrification program on a palm oil plantation in the Congolese rainforest. In 2013 he attended the leadership program “Yale World Fellow Program” at Yale University. He is working on a PhD in the arts at KASK, the School of Arts in Ghent. He gave lectures on art, economy and representation at the University College London, London School of Economics, Yale University, Museo Nacional Centro de Arte Reina Sofia in Madrid and many others.