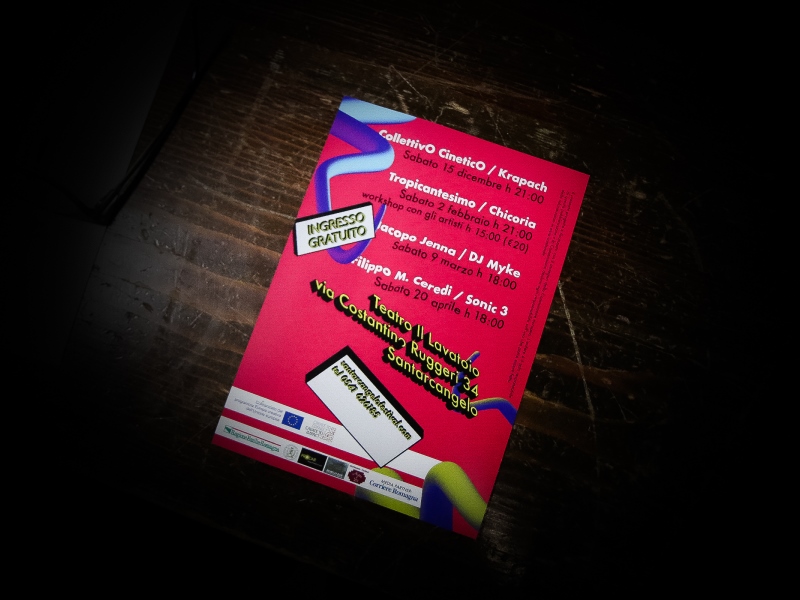 Wash Up is a project that has enabled five youngsters from Santarcangelo aged from fifteen to twenty to become the co-curators of the Teatro Il Lavatoio programme, a spin of unexpected proposals that during the course of the year saw bands and musicians chosen by the youngsters taking turns beside artists chosen by the Santarcangelo Festival artistic direction.

The second in line of WASH UP events:

Tropicantesimo brings the colors of the flowers and the tropical forest, the flavors of the fruit and the moods of the sun-scorched earth. But above all it embodies the tribal sounds and rhythms of the equatorial band. With his sound experiments, floral installations, dreamlike visions of gardens against nature, it is the natural construction of an artificial paradise. Tropicantesimo has no home, it is located beyond the known world, between a mythical El Dorado and a dilapidated local that sells alcohol under the counter during Prohibition.

Chicoria, the stage name of Armando Sciotto, is an Italian rapper, beatmaker and writer, one of the greatest exponents of the hip hop music scene, not only Roman, and co-founder of the crew Truceklan. In 2014 he opened YouTube vlog Smuggler’s Bazaar and publishes Servizio Funebre, a 14-track album in which he collaborates with Noyz Narcos, Metal Carter and MysticOne; in 2016 he released his last solo work Lettere. Thanks to the support of the NoBook publishing house, he published his first autobiographical book Dura Lex in 2015. The law is not the same for everyone: the publishing success brings Chicoria to present his project in schools throughout Italy. Since 2015 he has been taking care of columns for Vice and Noisey, and is a guest on radio and TV broadcasts, among them Annozero by Michele Santoro for La7.