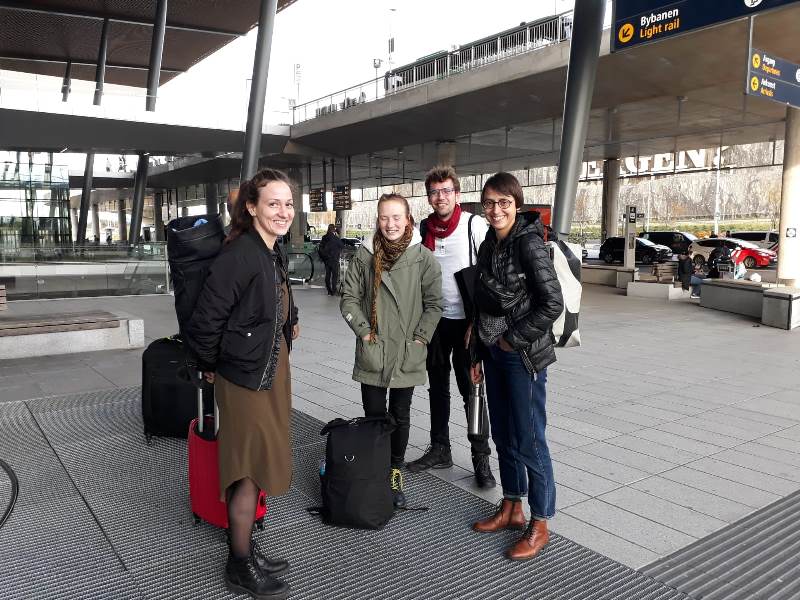 As part of Space to Connect’s activities, three students and one festival dramaturg were sent to a project meeting of Create to Connect -> Create to Impact at the Meteor Festival in Bergen, Norway. The trip contributed to the delegates’ professional development in essential ways, which will be illustrated below in the following reports from this working trip.
Another outcome of the trip is an invitation to the production Teenage Songbook of Love and Sex by Icelandic artists Ásrún Magnúsdóttir and Alexander Roberts, which, thanks to the participation of curator Pavel Štorek, will be part of the 2020 edition of the 4 Days in Motion Festival in Prague.

“The opportunity to take part in this trip to Bergen, Norway for the purpose of the CTC-CTI project meeting, which took place in the context of the Meteor international theatre festival was very significant for me, not only from the point of view of my dissertation research, but in terms of general enrichment in the field. Because I deal with contemporary performative art, specifically the dramaturgy of dance and movement performances, the meeting of the project members, who are almost entirely institutions of innovative performing arts from diverse locations in Europe, the festival itself and the performances I had the opportunity to see were all of great benefit to me.
[…] I gained an overview of arts institutions and their activities from Georgia to Belgium and had the change to gain insight into how diverse the position and sense of innovative performance work is depending on the socio-political context in which it is created. In particular, the panel discussion Some Say Participatory Art Has Failed […].
The four performances of the Meteor Festival expanded my horizons to the dramaturgical approaches taken in contemporary conceptual performance. […]. I obtained two publications […] the theme of dramaturgy of dance and movement performance, outputs from the artistic research of performer Ingri Midgard Fiksdal, who presented her dissertation project […].
I consider the study trip to Bergen one of the most stimulating impulses I have received in the last six months, as is usually the case when travelling in abroad, in whatever form it takes.”

“I accepted the opportunity to participate in the European network of artists, theorists and curators in the context of the CtC-Ctl project meeting in Bergen with enthusiasm and curious expectation. I came to the meeting, held during the Meteor 2019 international festival, in three roles: as a student in the field of Theatre Studies, interested in activities on the borders of theatre and daily experience of the urban landscape, the study of performance and contemporary theories of space; as a representative of the Alfred ve dvoře theatre, ready to present the dramaturgical and aesthetic features of the theatre, its resident companies and the environment of the theatre itself; and last but not least as an active theatre maker and representative of the Relikty hmyzu association. Through very thematically diverse performances, presentations, conversations with artists, curators and managers, I had the opportunity to look at and discuss a number of approaches, not limited to theatrical creation and organisation. Thanks to the trip, I had the possibility to offer contacts for collaboration and at the same time obtain references for my own study and creative practice.”

“[…] In the first place, we were able to deepen our orientation in the international theatre scene, not only through the individual performances we attended, but also through meeting representatives of very interesting partner festivals in Ljubljana, Tbilisi, Lisbon, Belgrade, Paris and London.
From the artistic point of view the performances were genuinely inspiring, aesthetically very close to me, of high artistic quality and very encouraging and refreshing for my own work. The performance Yoga for Theatres with the subtitle “a galactic song situation” by MaisonDahlBonnema and the opera-performance by Mette Edvarden and Matteo Fargion with the title Penelope Sleeps were very far apart aesthetically, but a remarkable observation arose from them for me.  […]
Of all the performances I saw, the most essential for me was the work of Ásrún Magnúsdottir and Alexander Roberts titled A Teenage Songbook of Love and Sex, in which the two artists reached an uncommon level of understanding with a group of teenagers and brilliantly translated this to the stage. In this performance, the teenagers reflected the heteronormativity and enormous distance from the reality of everyday teenagers contained in the lyrics of contemporary pop songs. To this end, they wrote brand-new, original lyrics of songs based on their own personal and very fragile experiences of love, sex and first attempts in these areas. The stage presence and self-assured performance of the group of about twenty teenagers between the ages of 14 and 18 were extremely suggestive to me and absolutely re-legitimized theatre as a medium because the message that these children presented could not be communicated other than through performance. Secondly, it was a great lesson on how to work with young people, which is still a major challenge in the Czech Republic, both in the education system and as a leisure activity.
Further, a meeting with Knut Ove Arntzen, professor at University of Bergen and expert in theatre studies and PhD candidate and choreographer Ingri Midgard Fiksdal, was essential in terms of my MA research on the theme of theatre and weather. In a personal meeting with myself and Barbora Liška, Professor Arntzen presented his theory of de-hierarchization of artistic spaces, which comes from his diagram, that places text and audio-visual elements, actors and non-actors, frontal- and spatially-orientated spaces, etc. on opposite poles.
Last but not least, it was extremely important to watch the festival alongside Barbora Liška and Adam Pospíšil, students of theatre studies in Prague and Olomouc. From the perspective of a student of scenography and emerging artist, I have to point out that unfortunately, there is no truly functional platform in Prague where theatre practitioners and theorists can meet to reflect on the state of the field. Therefore, it was beneficial for me to reflect on the festival performances not only through the eyes of experts but also with student-colleagues from theoretical disciplines. Finally, I would like to summarise that the contribution of the trip was very refreshing from a professional point of view, whether it was seeing performances, taking part in professional discussions or acquiring materials for theoretical research in my master’s work. My insight into the local alternative theatre scene also inspired me to apply for a work placement in Bergen in the future.”

– Zuzana Sceránková, MA student in the Department of Alternative and Puppet Theatre, Theatre Faculty of the Academy of Performing Arts in Prague (DAMU)