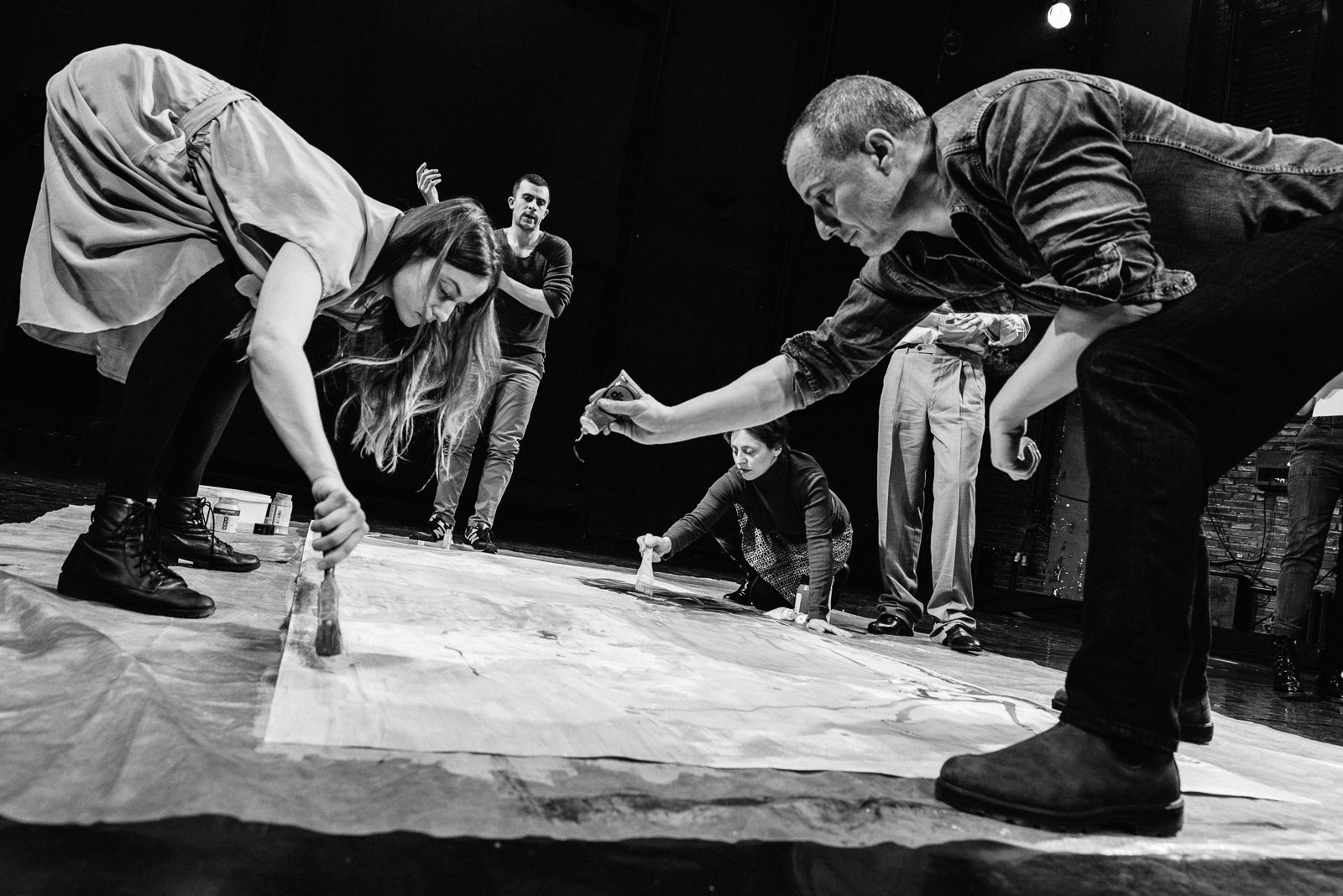 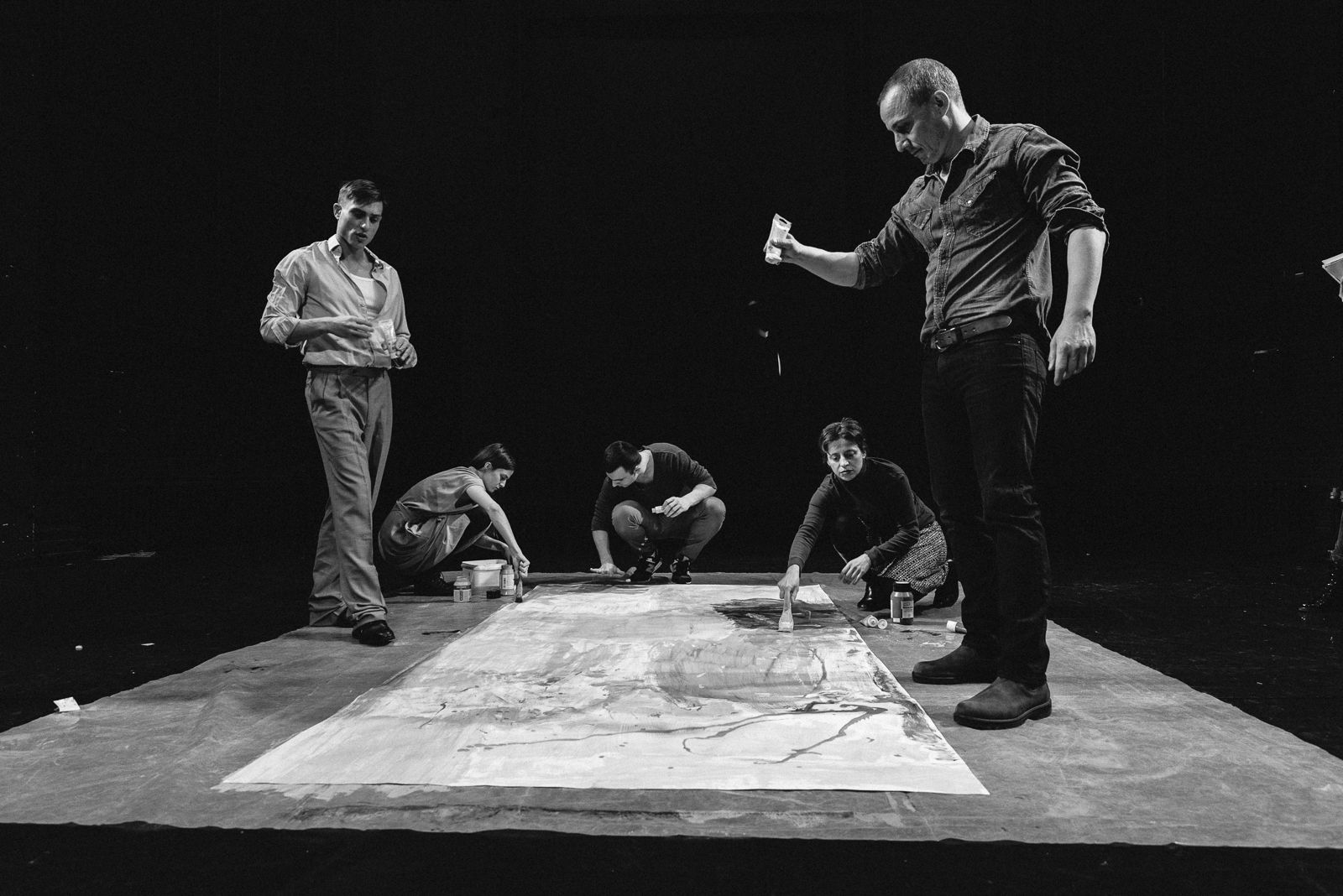 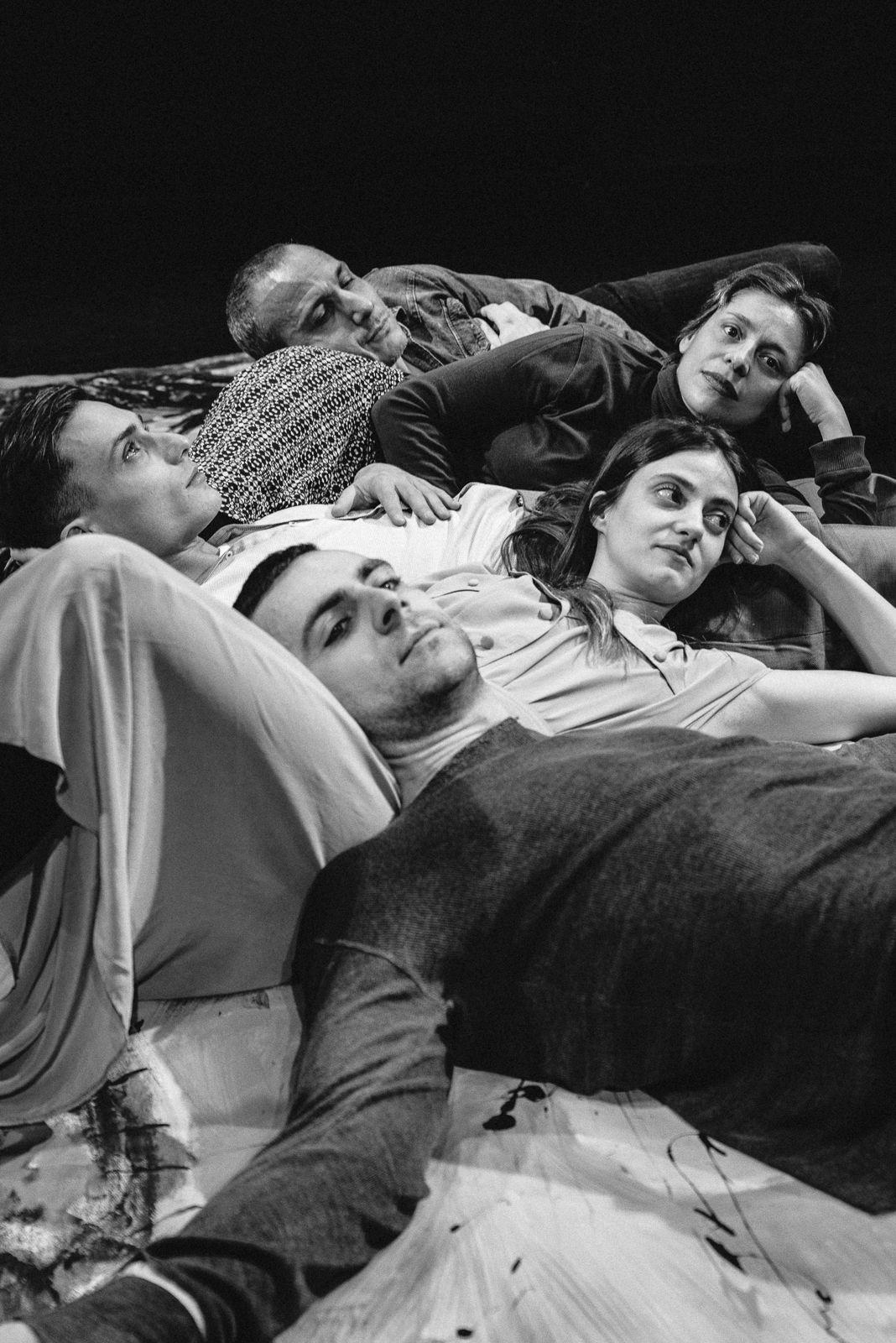 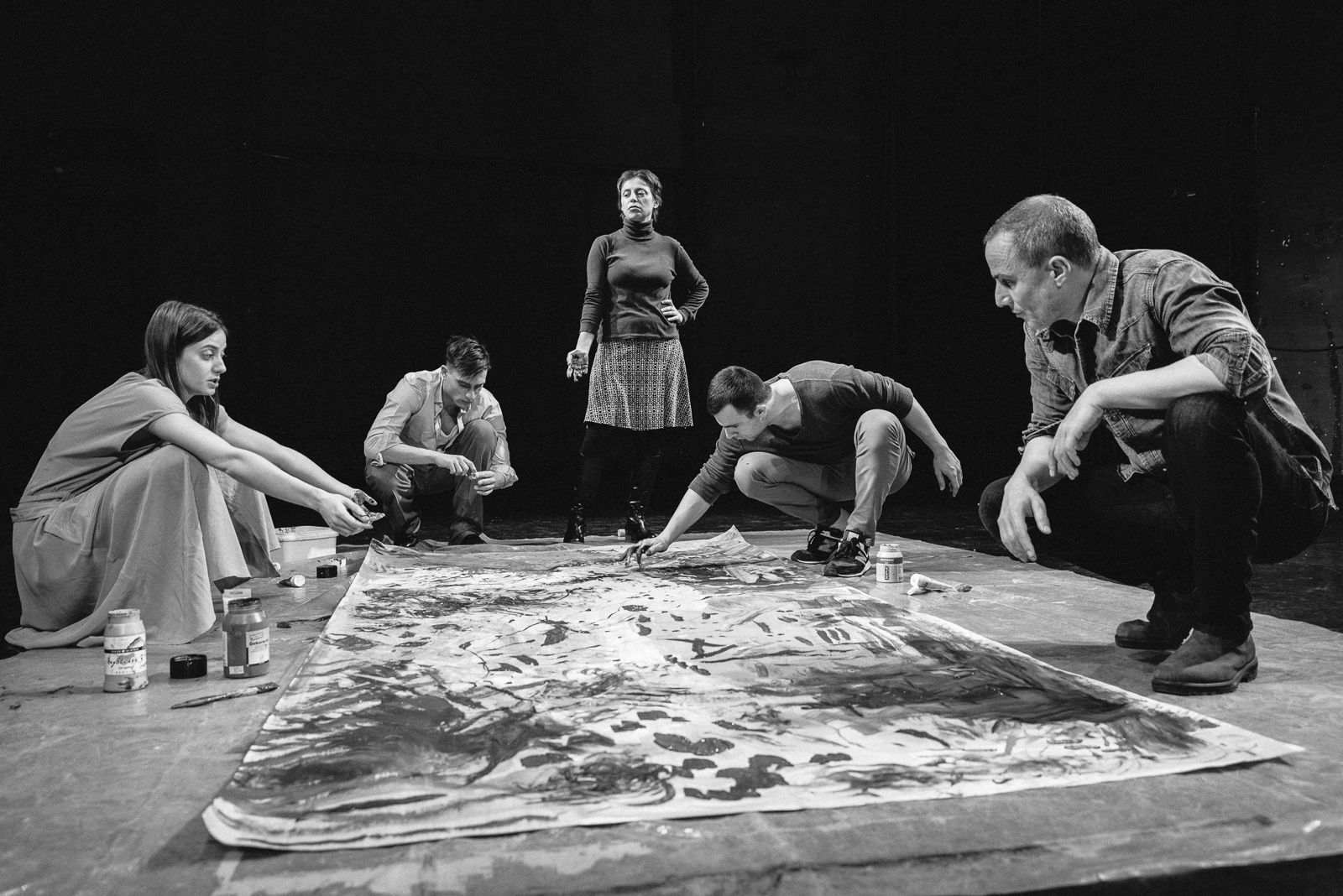 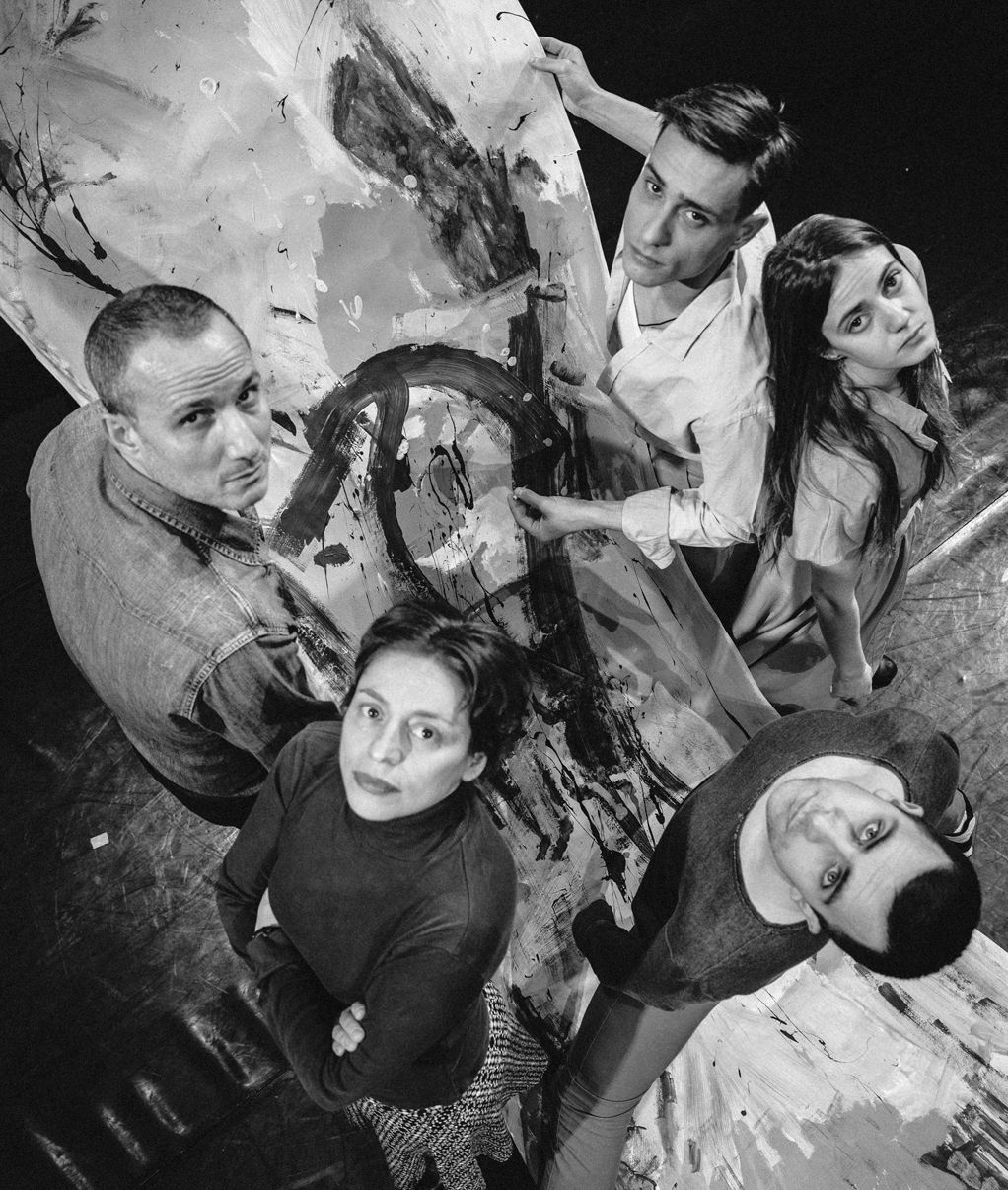 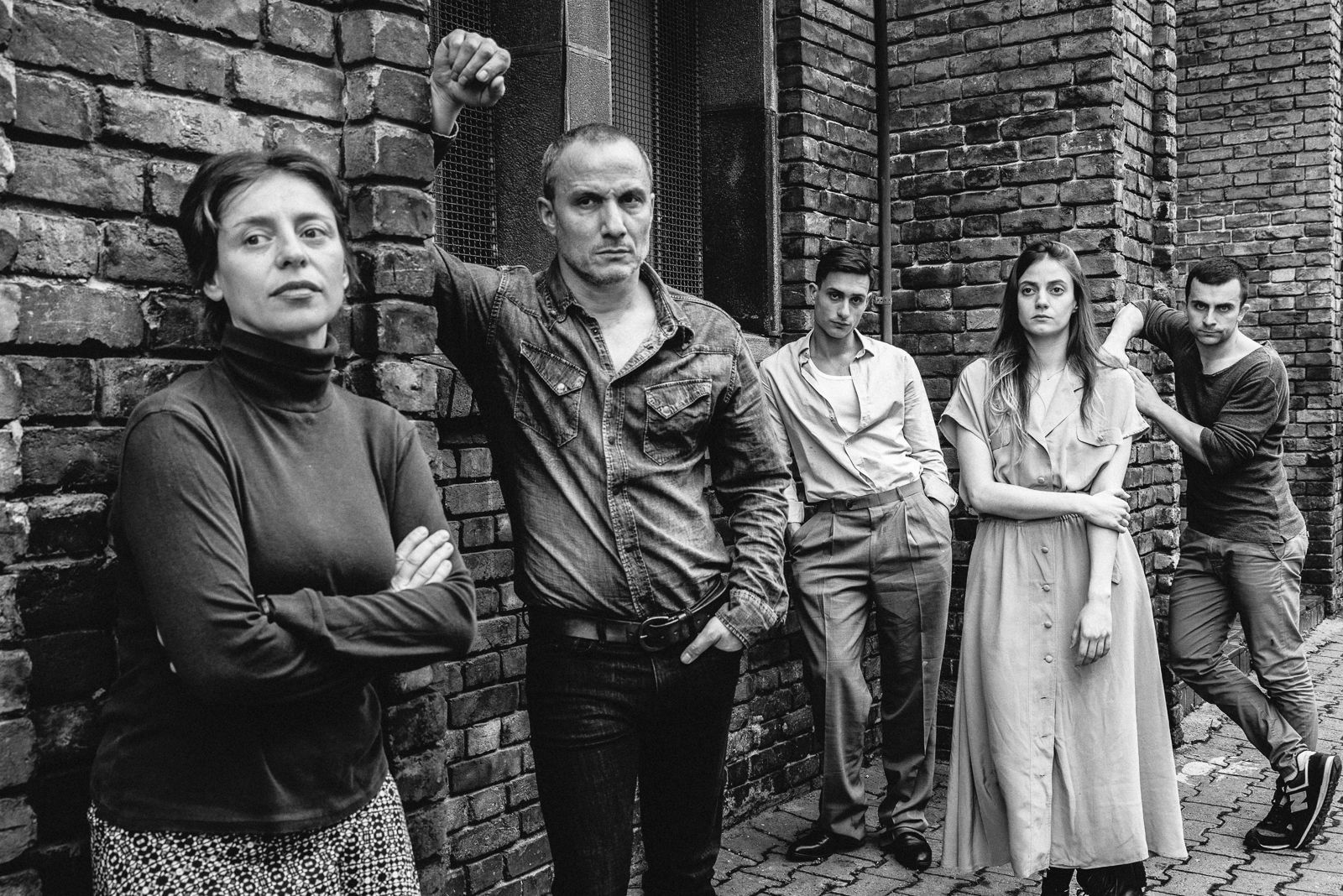 This theatre project, co-written by Tamara Antonijević, Bojan Djordjev, and Tanja Šljivar, addresses the legacy of the 20th century from the perspective of three revolutions that left a mark on it and reshaped humanity. These are the revolution of the artistic avant-garde, the communist revolution, and the sexual revolution, which put an end to the erstwhile order and demanded a spiritual, material, and bodily emancipation of humanity. The question posed by this piece is how to treat the legacy of emancipation at a deeply reactionary time, when technological progress and the freedoms previously won and proclaimed are being used to promote conservative social forces or even, along with scientific breakthroughs, are negated, suppressed, archived, and removed from public discourse, where, on the so-called “free market of ideas”, one is allowed to say anything without risking any consequences at all.
These topics are articulated by the figures of three artists from the 20th century: Marguerite Duras, Oskar Davičo, and Pier Paolo Pasolini, who, like phantasms or spirits, inhabit our stage. Reflecting on their works, lives, and political engagements shapes the play’s visual, linguistic, and performing text. Davičo, a surrealist and communist using an eroticised language brimming with the inexorable power of rebellion; Duras, with her anorexic, devastating lines as the supreme kind of erotics of the text and body; and Pasolini, in his quest for the holy, the vernacular, and with his contempt for consumerism, in their capacity as witnesses, prophets, and critics of the 20th century, riddle our 21st century with images, questions, and assertions.
We began working on the project a week before the pandemic was declared, whereas the première was scheduled exactly a year later. Has the year behind us, which saw us not only as witnesses, but also as direct victims of the final collapse and disappearance of the ruins of our healthcare and social protection systems, pushed us further away from those three figures or, to the contrary, brought us closer to them than ever before? Between the forgotten revolutions of the 20th century and the “normality” we abandoned facing the pandemic, Duras, Davičo, and Pasolini revisit us not only as spectres from the past or prophets of what has already befallen us, but also as some of the many voices emerging from the cacophony of the domain of sociality – from text, film, and poetry, as well as from the streets, hallways, lifeboats, and social networks.

Oskar Davičo (1909, Šabac – 1989, Belgrade)
A self-killer with fake names, surrealist, and poet. Got to see and live through all the greatest hopes and disasters of the 20th century, arrested multiple times, served time in prison, escaped, engaged in gun fights, worked as a waiter, worked as a sparring partner in a boxing school and performed as Rastko-Stefan Očivadić in erotic shows, screwed rocks and gorges, and made love to clouds and pines. Through him and with him a language and its literature disappeared and changed, while he cracked and tweaked it, just like he did with everything else in life.

Marguerite Duras (1914, Gia Đinh – 1996, Paris)
A child prostitute with a men’s hat, an offspring of poverty, an alcoholic from birth, a voyeuse, ever willing and hungry, always tireless, from a family of colonists and failed rice growers, from a mother who fought the ocean in vain. A member of the Résistance and Communist Party. She nursed a concentration camp survivor, then left him, gave birth to herself, killed herself, with every novel and every film, until she said: That’s all.

Pier Paolo Pasolini (1922, Bologna – 1975, Ostia)
Certainly a mystic and filmmaker. Quite certainly a Marxist and a communist and a poet. But above all a pauper, one of the poor, one of the lost, always there for those who never ever had anything nor will have anything, except communism. Adhered to no laws but to that one. That is why he had 33 lawsuits filed against him, for public disgrace, foul language, obscenity and filth, pornography, contempt of religion and the state. That is why they beat him up, broke his bones, crushed his testicles, ran him over with a car three times, and then burned him. And still they can’t touch him.

A Collective Biography of the Authors

The authorial team behind Sex – Art – Communism are linked through shared projects in the domain of art and especially theatre in various authorial constellations.
Bojan Djordjev, a theatre director and author; Siniša Ilić, a visual artist who also works in performance design; and Maja Mirković, a costume designer and artist, work together in institutional theatre and independent artistic productions. In 2019 they curated Serbia’s presentation at the Prague Quadrennial in Performance Design and Space – Scene Work Ahead. Tanja Šljivar is a playwright interested in collective writing practices as well as various models of presenting performing texts. Tamara Antonijević is a dramaturge, writer, and collaborator in projects involving various media and, along with Šljivar, a member of the björnsonova collective. Miloš Timotijević is an actor in film, television, and theatre, and Vladislava Đorđević is an actress at Duško Radović Little Theatre and a participant in a number of projects produced at B92 radio and television. Slaven Došlo is an actor in film, television, and Terazije Theatre, Tamara Pjević is a dancer, member of Bitef Dance Company, and instructor at Lujo Davičo School of Ballet, while Đorđe Galić is an actor pursuing a master’s degree at the acting programme of the Faculty of Art at the University of Priština. Dijana Marojević, a professor of diction, stage oratory, and rhetoric at the Faculty of Dramatic Arts, also works as a speach coach in theatre, television, and film. Čarni Đerić is actor, theatre author and stage movement collaborator. Luka Papić, a film director, is also active in music through mangulicaFM project, the rock band Bicikl, and as a composer of music for theatre plays. Katarina Vojnović and Igor Milakov study Management and Production in Theatre, Radio, and Culture and the Faculty of Dramatic Arts in Belgrade. Katarina Popović is a graphic print designer and visual artist; Dragana Jovović is a theatre and film producer, whereas Milana Matejić, a student of theatre directing, joined the authorial team as assistant director in rehearsals conducted in 2020.

Sex – Art – Communism is a co-production of Bitef Teatar and Udruženi umetnički rad / United Artists Labour under the auspices of the Create to Connect – Create to Impact project. It is supported by the Creative Europe programme of the European Union.