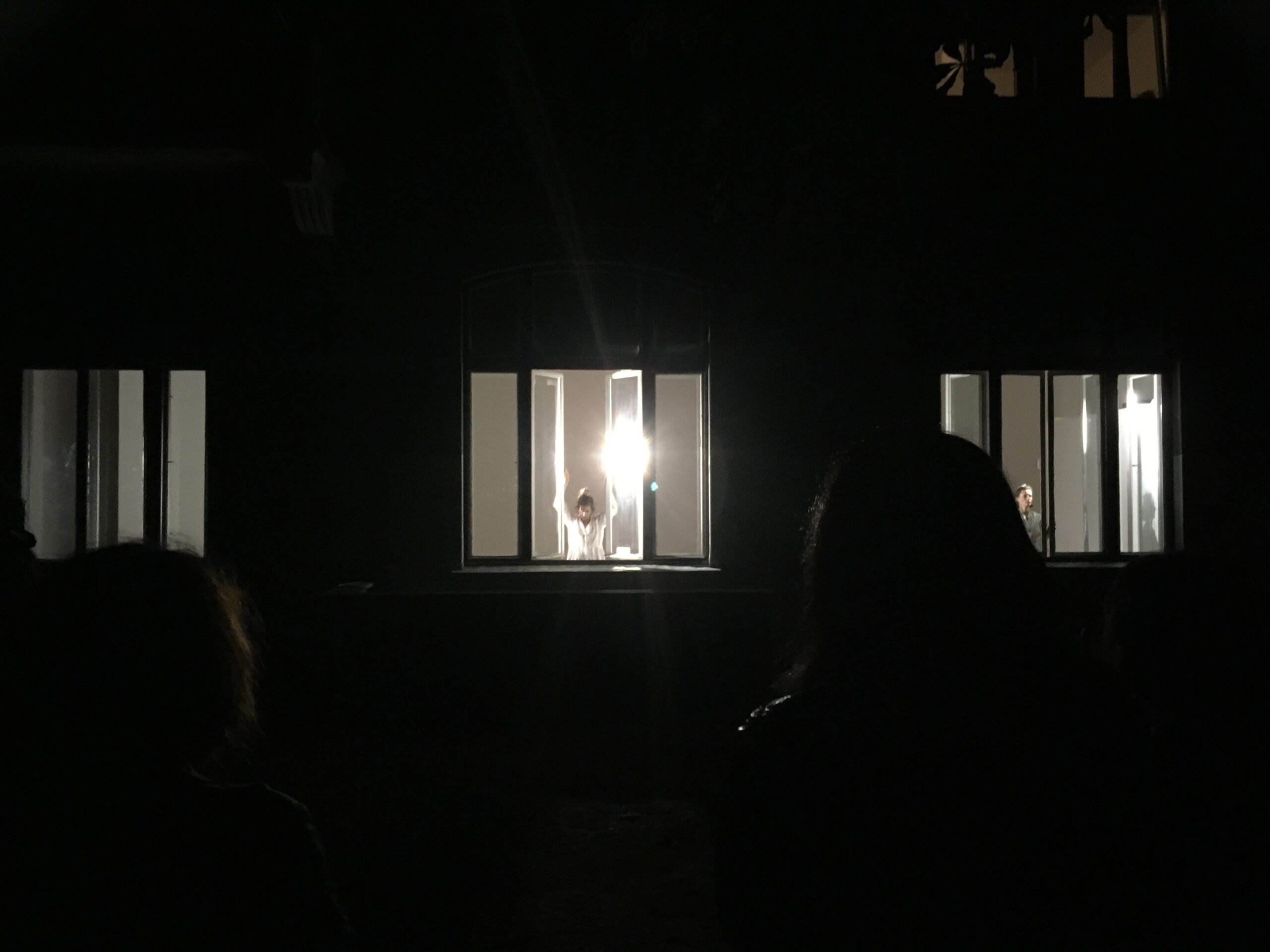 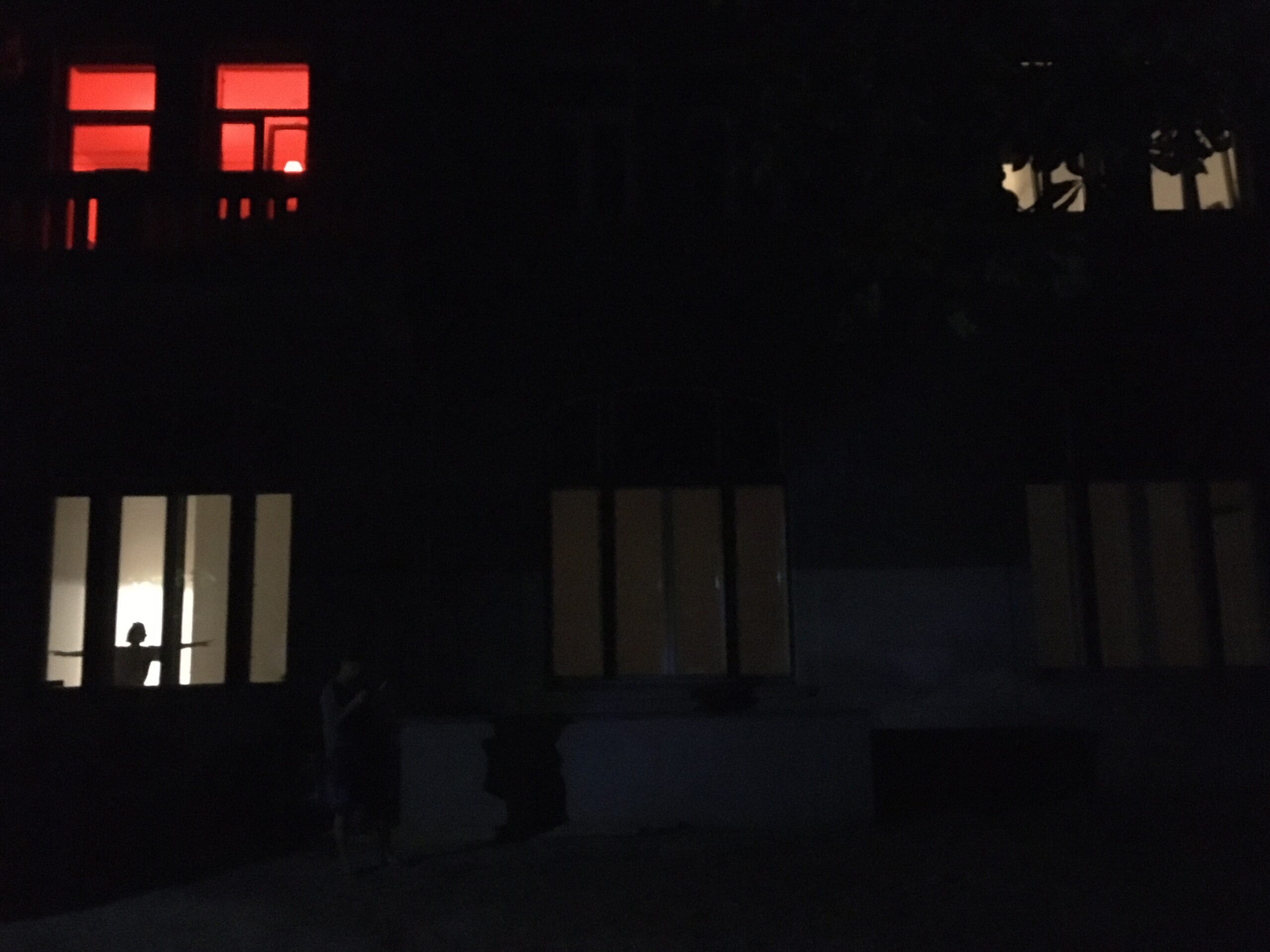 My evening journey to see the Rear Window dance performance – from the outskirts of Ljubljana to the town centre – seemed to take longer than usual. It was, however, also an opportunity to ponder some things that were on mind at the time. This was my first outing to see a dance performance after the start of the pandemic in mid-March. After the dance performances I was planning to see before the summer got cancelled, I became a bit lazy, or maybe torpid? I lacked the energy to attend those few performances that were still on in spite of the official anti-covid regulations and recommendations.
The Rear Window dance performance by choreographer Mateja Bučar, which was created in the pre-coronavirus period, became all the more topical in these unprecedented pandemic times. And it gave us all a lot of food for thought. About dance performances, audience and cultural policy in today’s Slovenia.
In the dance performance everything revolves around three windows that provide the viewers with a voyeuristic experience as they watch the dancers perform inside the building. In part, the dancers try to go beyond the intimacy of what is happening inside by opening the windows, but in the end they remain inside a safe dance cell in the interior, while the audience stays safe outside with a limited view of what is going on inside the building. The windows are there as a boundary; in the final stage they are even closed. They make one reflect on the safety of the dancers and the viewers, when ‘being safe’ is understood in terms of different kinds of safety (or lack thereof): physical, existential, mental, social, cyber, national and the like.
The viewers are allowed to watch this dance behind the four walls through three windows; their individual choice of position in the outside world, however, frames what they will see. At a safe distance, the viewers can thus see only the upper part of the performers’ movement, the more daring ones, however, would end up without an overall view of the performance at the cost of seeing the individual performers’ movement in its entirety – but no such daring viewers were part of the audience this time. Although we – the viewers – were on the outside, we were not outside the box. We all wanted to watch the barrier and the dance behind it, none of us stepped close enough to the window to overcome the limitations of the visible. Was this just a matter of us being polite?
However, I am sceptical that the idea behind the planning (and the execution) of this dance performance might have been about more than simply putting the viewers in a different position and providing them with a new experience, with a new view of the dance performance. Perhaps, with greater financial support for contemporary dance and this sort of projects, the performance would have been staged inside a hall, and the barrier between the dancers and the audience would have been achieved through windows as part of the stage design? Was the audience watching the performance from the macadam courtyard, standing under the open sky really just about a more authentic voyeuristic experience? Part of the courtyard was reserved for the audience and all the cars had been removed from it for this very reason. Chestnut trees provided some most welcome support to the standing viewers and the best seats were on top of the caterpillar tracks of a nearby excavator and the sandy courtyard floor. During the 45-minute performance, the only chair that had found its way among the audience by chance was used by three different people. As soon as the night fell, the white face masks disappeared from the viewers’ faces; each in their own way, the viewers tried to find a compromise between ‘maintaining a physical distance’ and the proximity (visibility) of the artistic experience at hand.
The alternative nature of the performance – the captivity of the performative podium with (six) walls on one side and the audience’s alternative open-air space with the courtyard on the other – was a reality. An acceptable and welcome one. One that can become threatening if replicated too often as part of this “new normality”. Separating the performance from the audience, separating the interaction between the artists and the viewers, closing off the spaces of artistic events… At a time when it is no longer clear which of the two is more dangerous – various viruses or the ideas that may get transmitted alongside the viruses, everyone becomes aware of the power of culture, of its power to create to impact. Despite its Dancers without Answers subtitle, the dance performance Rear Window provides an opportunity to reflect and gives an insight into this new normality – mainly through the viewers’ participation in the framing of the performance. Perhaps the viewer’s individual experience of standing during the performance will also help to revise his/her position on contemporary burning social issues?