Postcard With Villains, Aliens and Superheroes From the Heart of the Alps 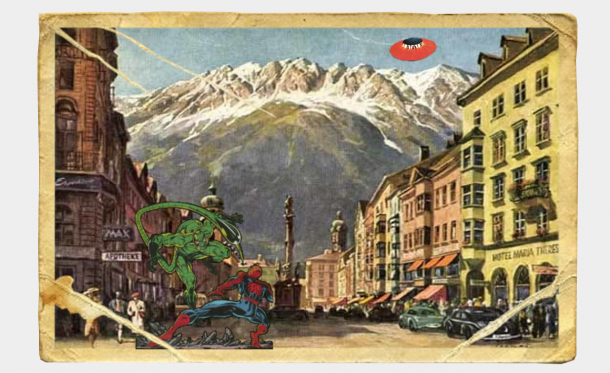 Dear listeners,
when the epidemiological tracking board finally turned green at the end of June, I boarded the train and travelled to the heart of the Alps. I escaped the scorching heat of June in Ljubljana with pünktlich Austrian trains to visit to the city of historic facades painted in fifty shades of pastel colours – in short, to Wes Anderson’s wet dream. Innsbruck, otherwise best known for its tourist attractions and sports history, is also an important venue on the art scene, and this is exactly why I came, to reflect on the question of the direction art is headed in the post-corona era.
The reason for the trip was the presentation of the Working Encounters project, work meetings of sixteen male and female artists selected by the partner institutes of the Create to Connect –> Create to Impact international network, which covers countries from Georgia to Norway. The lead partner of the network that organized the project is the Slovenian institute Bunker, which in managing the network strives to establish long-term connections between artists, producers, researchers and the audience, and thus new forms of participation and creation. And is there anything more relevant in these times?
The results of the project, which took place last year and had its premiere online, were presented from June 22 to 26 at the Kunstraum Innsbruck project space. The exhibition in a real space by the picturesque Maria-Theresien-Straße was entitled On Other Stories. On Villains, Aliens and Superheroes. Just before we enter the exhibition space, our attention is caught by a video made for the exhibition by the Romanian artist Gagiu Daniela Cristina. Working as an educator, she let their primary audience, the children, to speak about superheroes, villains and aliens. In the video, we witness an interesting dichotomy between a girl for whom the word villain represents a farting ghost near which no one can breathe, and a young girl with adult concerns, for whom the same word evokes a somewhat more abstract consumer activity.
Audio (3:56)
Popular culture and vernacular stories often influence the mass imagination more profoundly than official political and media narratives. Superheroes and villains are one of the main representatives of influential and ubiquitous popular culture, but as you have heard, even these phenomena are not exempt from reflection. I was told more about the content and central critical focus of the project by Serbian director Bojan Đorđev, a member of the Belgrade collective and curatorial team United Artists Labour consisting of Siniša Ilioć, Ivana Marjanović, Nataša Mackuljak and himself:
Statement (5:00)
The main exhibition hall of the Kunstraum is a white cube, in which the exhibited works appeal to the visitor without interruption, due to the absence of architectural elements and picturesque views through the windows. The exhibited works are arranged based on their similarities in addressing the subject matter. Some of them drew inspiration from media representations of superheroes, others in superhumans such as the determined sick mother and the guerilla anti-fascist grandmother. Still others thematize the discursive nature of the dichotomy of superheroes and villains, which is also formed in the political, ideological and historiographical fields. Conceptually, the discursive level was most comprehensively encompassed by the Slovenian theatre artist Leja Kukovičič with her word sculptures. The work consists of six inscription tables, from which it can be concluded that two are missing – just like the individuals labelled as enemies of the state, who simply disappear one day. In the poetically written instructions, the artist questioned the strategies of searching for these persons, thus questioning the discursive formations of the enemy-hero.
Due to epidemiological restrictions – although most of the participating artists do not primarily work in the field of visual art – most of the exhibited works were created in internet-friendly media such as websites and videos. Seeing the presentation of the mentioned media in a real gallery context, after watching two long videos, I stumble upon the question of their friendliness towards the gallery visitor. Tens of minutes long videos may be pleasant in the comfort of the home sofa, which also implies a different temporality, but standing before the projection is tiring. With that said, the act of standing reflects harsh reality in which many artists were forced to create during the last year. One of the most innovative solutions to this problem is the work of Slovak artist Zuzana Scerankova.
Statement (8:13)
In its pursuit of answers to the question of creating art in the post-corona era, the meeting of artists from diverse and international contexts proved to be extremely fruitful. The epidemic and the adaptation to it have not had the same effect on everyone, which reminds me of the words of the Innsbruck artist Heidi Holleis.
Statement (9:30)
The artist farthest removed from his cultural field in Innsbruck was Rodrigo Batista. A Brazilian theatre artist and educator working in the Netherlands shared with me his view on the state of art and its future.
Statement (10:12)
As Batista also told me, the radical theatre he is pursuing will not only be created based on the considerations brought about by the anti-corona measures. The more deep-rooted ideas of quality, funding and politics also need to be addressed.
Statement (11:27)
when we play the charade …
Metod

Link to the article originally published at Radio Študent (as a complement to a radio show Letters from Abroad) on July 6th 2021.