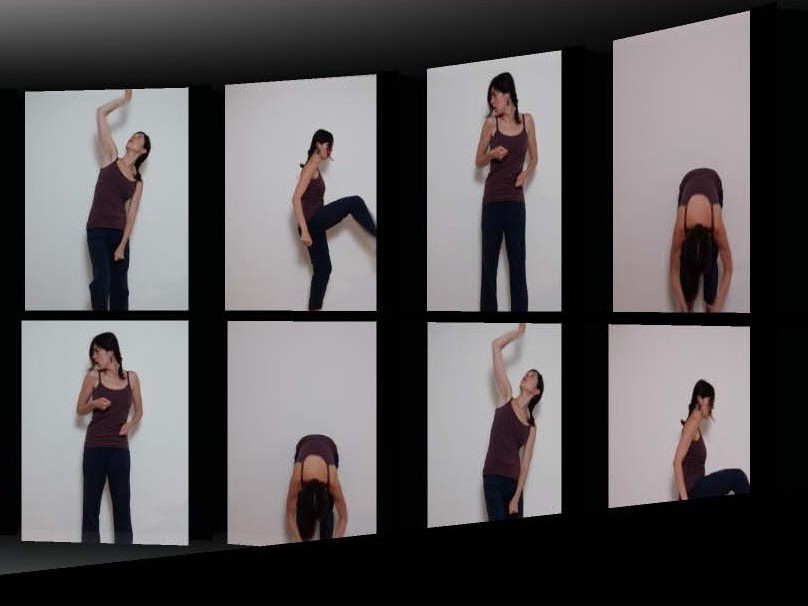 The KoresponDance festival and the Arts Institute of the Theatre Institute hosted a world premiere of a unique stage performance that combines live-action with an interconnected experience of performers and audience, using digital technology. The dance performance Collectron was created by audio-visual and dance artists Jana Bitterová and Ian Biscoe of the Movement Touch organisation.

“The show came to life as a part of international network Create to Connect -> Create to Impact, which is supported by the Creative Europe programme and therefore able to enable the exchange of stage productions and artists cooperation, initiated by partners from fifteen European countries. However, it is also a direct response to the current situation – live artists are standing on the shifting sands of uncertainty right now – will we be able to connect with the audience during our performance directly? Or will our theatre, dance or music productions once again depend on remote transmissions only,” said Martina Pecková Černá, representing the Arts Institute of the Theatre Institute, the partner of this project in the Czech Republic.

The Collectron is an artistically imagined device located at the fringes of the world we physically inhabit. It is a circular venue without physical substance that builds on a tradition of the ancient amphitheatres or Shakespeare’s Globe. In the Collectron, participants can encounter unexpected meetings with people located elsewhere. By spending a few seconds moving in front of the camera, they can make their mark on the collective art piece composed by the movement chain, which develops thanks to the audience’s participation.

It was possible to participate in this collective art creation when a live connection opened on the historical border of Czechia and Moravia, joining the Žďár nad Sázavou castle with a local hotel U Labutě.

“Placing the Romanian “end” of the project in a 2500 people Roma ghetto near the garbage dump of Cluj / Romania is meant to open a can of worms. Is this placement? Is it dis-placement? Is it mis-placement? What we know is it is sort of a rebellion against a default imaginary of who art producers, co-creators and consumers of contemporary art are or supposed to be. It also admittedly challenges some of our ideas about “safe place” or “aesthetics”. Now do we necessarily have to go analytical and conceptual about developing these sorts of meaning? Well, no. We suggest it is exactly the much more democratic field of the perceptual that we’ll be able to use, in order to co-create sociality and meaning,” said Istvan Szakáts from a Romanian independent organisation AltArt, partner of the Create to Connect -> Create to Impact project.

The chain of movements of all Collectron participants was available for viewing during the festival in the form of a video sequence in “Studniční kaple”, a chapel of the Žďár nad Sázavou castle, and eventually online. “Collectron connects people from all over the world using dance; that is what drew me to this concept from the beginning. It is a fairly difficult and complex experiment which is why the experienced and hospitable environment of the KoresponDance festival is the ideal place for it. It is, to a certain extent, a true Covid project. It connects people one-on-one digitally and also works in real life. I assume the epidemic is here to stay for a while, and so I believe that after testing Collectron here in Žďár, we will develop it more and perform in other destinations as well,” said Casper de Vries, chief programme manager.

The main programme of the KoresponDance festival launched on the 15th of July. This year the programme consisted of four blocks, each constituting a separate, intimate festival to take place in the private gardens of the Kinsky family. As always, there was a lot to see: new circus, dance and physical theatre, community projects, workshops and other events featuring artists from Europe.