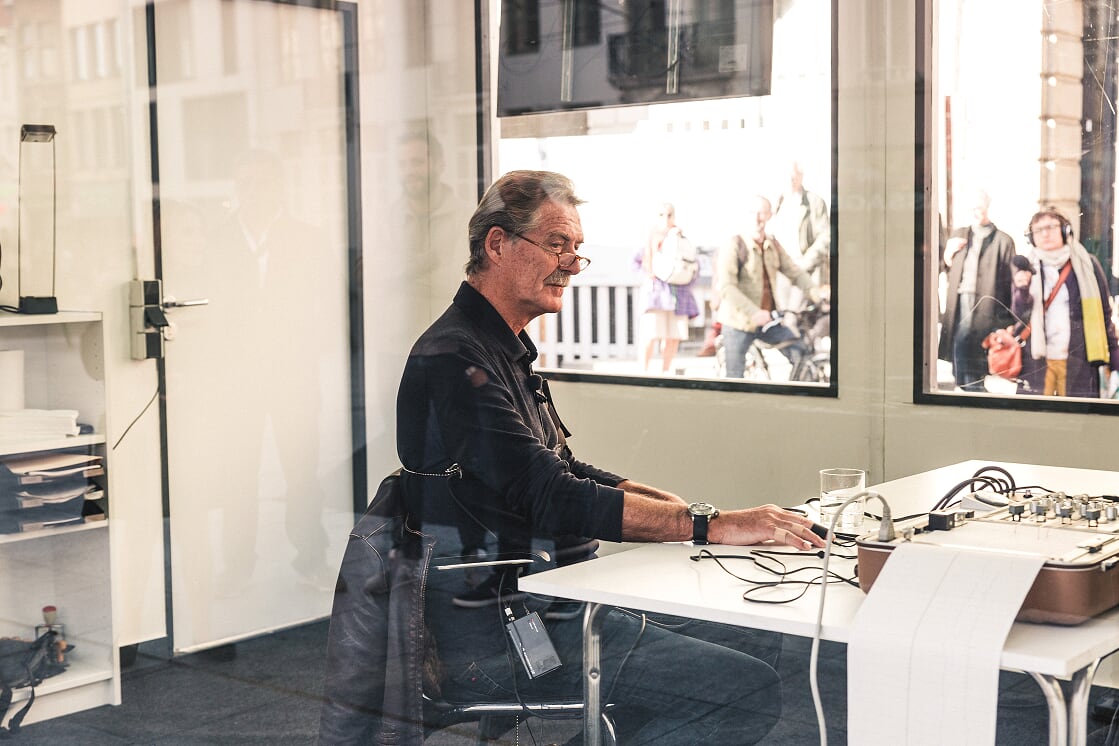 
During the preparation of the first season and the casting for The Ghent Altarpiece, several scandals arose involving NTGent. The decision to invite former Jihadists to the casting sessions for our re-enactment of The Ghent Altarpiece led to a debate about the limits of art that went all the way to parliament. The announcement about opening the entrance hall of the Stadschouwburg to more diverse artistic voices – and removing an existing work by a Ghent artist in return –led to a hot media debate about local heritage. And the assumption that the re-enactment of The Ghent Altarpiece could – as on the original altar itself – lead to the slaughter of a lamb on stage raises questions about the value of life.

In The Box of Truth we will investigate the moral and political judgments behind these scandals by questioning people who have been confronted with them in one way or another. Six characters from the “new” Ghent Altarpiece, connected to a lie detector, are questioned by the actor Peter Seynaeve. Beginning with their life stories, the experiences and the choices they made, we will get to the bottom of their personal contradictions and dilemmas, by confronting them with yes or no questions as in lie detector tests. Six of the stage figures will be invited to the public space to be questioned extensively: What do they represent, on stage and in real life? What sort of struggles have they had to endure? What sacrifices have they made? Have they done anything wrong? Who has the right to judge them? And in the end, what is the truth?

The audience could enter the anteroom of the Box after each interview (which took about 30 minutes) and put their questions to the participants via a computer. The questions were immediately visible to the interrogator, who asked the questions so as to ensure the procedure is adhered to.

The people who were interviewed:

Theme: The central panel of the Ghent Altarpiece shows the “Adoration of the lamb”, a metaphor for Jesus Christ, upright but bleeding from the breast, ready to die for the forgiving of human sins, surrounded by angels. How can dying and death be represented? How does our society deal with the end of life? How do we define a dignified death and are these values universal? Do these rights therefore apply to all sentient beings? Can death be presented on stage – or can one even be killed on stage?

Wim Distelmans is a cancer specialist and professor of palliative medicine at the VUB. He initiated the law on euthanasia in Belgium and is currently president of the Federal Commission of Euthanasia. After studying medicine, he worked in cancer research until he decided to go into practice. At that time, over 50% of cancer patients died. The daily experience of being confronted with the human suffering of people with incurable diseases led him to advocate palliative care and a dignified, self-determined death for patients. In The Ghent Altarpiece he is part of the central panel, The Adoration of the Lamb.

Steven Vander Stichelen is the owner of a slaughterhouse and a meat distributor. After his studies in Latin, Greek and facility management he took over the family butchery. Today the company is a medium-sized enterprise in which an average of 100 animals are slaughtered per week. The company purchases the animals, mainly cattle, in the region in order to keep their travel times to a minimum. The company offers both standard and Halal slaughtering. A few weeks ago, a law was passed in Belgium which prescribes anaesthesia before the ritual slaughtering of animals. In his opinion, we don’t know how it feels to die, but animals suffer from both these methods. In The Ghent Altarpiece he is part of the central panel, The Adoration of the Lamb.

Theme: Millions of people have died and are still dying in wars in the name of religion and have been persecuted for their beliefs, all over the world and across all religions. The Ghent Altarpiece shows the “Warriors Christi” with swords in their hands in the service of Christ. Who fights for their beliefs in our era and what are they fighting for? What would we be willing to kill for? For what would we sacrifice ourselves? And what’s stopping us? With which dead can we live?

Fatima Ezzarhouni is a nurse and was candidate for the city council  elections in Antwerp. She came to Belgium from Morocco as a child, with her grandparents. Her son went to Syria in 2013, on his 18th birthday, to support the Free Syrian Army and later ISIS. A few days after his secret departure, she received a letter in which he explained that he went to Syria to help the Muslims. A few days after her first rehearsal for The Ghent Altarpiece, in which she plays Mother Mary, her daughter-in-law informed Fatima that her son had died in a bombing raid. Her daughter-in-law and her grandchild are probably still in the Syrian rebel enclave of Idlib, against which the governments of Russia, Iran and Syria are planning a major offensive.

Bilal Alnouri is currently studying Multimedia Design at the KASK in Ghent. He grew up in Syria and as a young man he wanted to go to the Iraq to fight against the US army. But at the border he saw the people acting like animals, changed his mind and started working for the Red Cross so that he could help. At the KASK he began a project about dignity of life, conscious living and ritual killing, for which he raised “ART”, a lamb that was rejected by her mother. He planned to create a new cross-cultural ritual to kill “ART” at his final exam, exploring religious, cultural and social responsibility. “ART” is now on the altar in The Ghent Altarpiece.

Theme: In the Ghent Altarpiece, the Van Eyck brothers painted Adam and Eve naked and life-size. In the 15th century this was scandalous and revealing in terms of art. They also immortalized themselves, it is presumed, in the panel of The Righteous Judges, the authorities of Ghent and donors of the panel. What does a woman’s naked body signify? What is the role of the artist who depicts the image of a society? How does he relate to the characters in his artwork? Who has the right to represent whom or what in art? And what are the limits of art?

Milo Rau is the artistic director of NTGent and director of The Ghent Altarpiece. In his work the borders between art and reality are blurred and violence plays a major role. When research his play The Civil Wars he met Jihadists in Brussels and Antwerp and kept track of their families, while in La Reprise and Five Easy Pieces he put two Belgian crimes on stage. Lately, his casting call for a former Jihadist for the role of a Crusader in The Ghent Altarpiece has been discussed in the media and political circles. Milo Rau himself, together with his team, is part of the panel of the Law-Makers, known as panel of the “Righteous Judges”, in The Ghent Altarpiece.

Andie Dushime studies art history in Ghent. Her mother fled with her and her two siblings from Rwanda to Belgium after the genocide in 1994. At the casting call for The Ghent Altarpiece, Andie Dushime applied as Eve, since according to scientific findings the spread of man started from Africa. Together with Nima Jebelli, she’s the naked model for Adam and Eve on the front of the NTGent Schouwburg. In The Ghent Altarpiece, she plays the part of a narrator.

Link to the event on NTGent’s page