THE LONG BREATH OF A SOLIDARY PROCESS

The article was originally published at Theater Rotterdam News.

Under the watchful eye of the great Slovenian poet and jurist France Prešeren (1800-1849), a
group of more than 30 people perch at the foot of his pedestal in the famous square in the heart of Ljubljana. They carry placards bearing such terms as “future,” “children,” “justice,” “connection” and “creation. While the 19th-century poet once lent his controversial words of a toast to the Slovenian national anthem, on Aug. 25, 2022, “the protesters” are asking unsuspecting square-goers for their views on the meaning of the printed terms. For them, what connotations do common words like “future,” “nature” or “connection,” concepts that can hardly be interpreted separately from the social and political context in which they are used? To get the conversation going, the white shields have as neutral definitions as possible printed on them; for example, the term ‘connection’ reads, ‘a person or organization you know who can help or advise you in your social or professional life’ and ‘the act of connecting or the state of being in connection.

‘Not that very heated conversations arise in the sun-drenched Prešeren Square – strolling wins over discussion for now – but the procession certainly attracts attention. People react happily and amazed. Terrace-goers make videos with their smartphones. A few ask Croatian Sinaća Labrović (57), the creator of this public-intervention-with-signs, for an explanation. ‘I want to initiate the most  objective outdoor conversation possible about polarizing concepts, hence the pristine white design of the signs and the neatly printed, encyclopedic descriptions,’ says the visual artist. “I don’t want an activist setting with slogans in cocksuckers’ feet on a signboard. That deters. Then people take a stand in advance, for or against. With Words, I encourage an open dialogue.’ 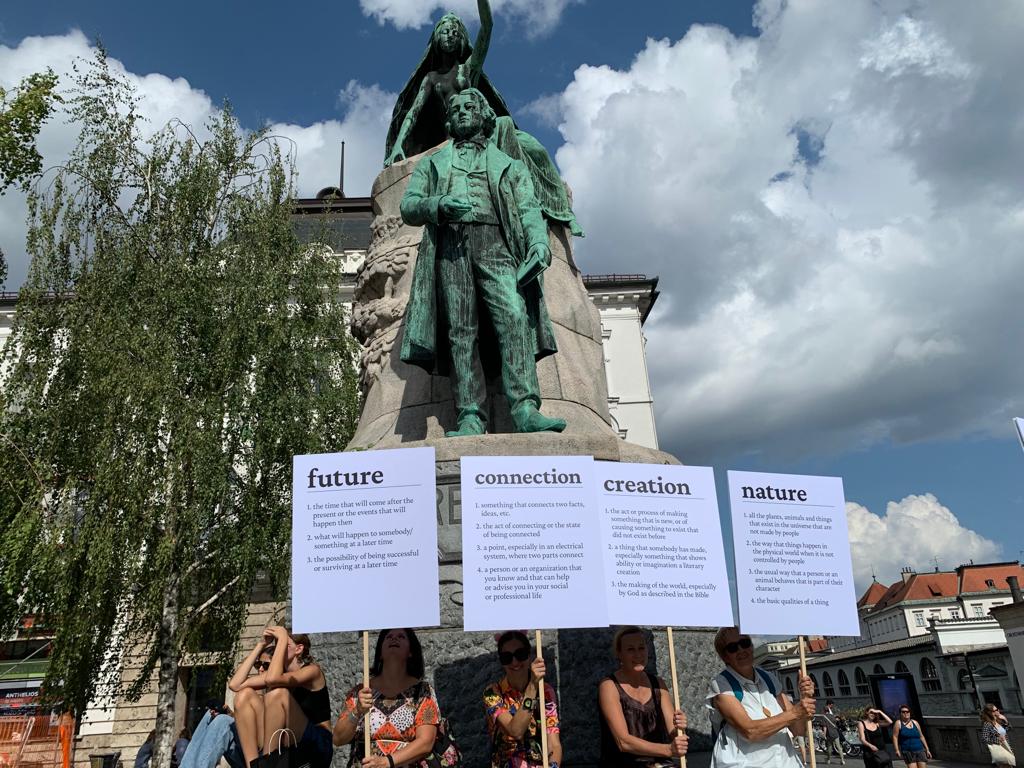 With his “interventions in public space,” Croatian artist Labrović is a welcome guest at the annual Mlada Levi (Slovenian for young lions) festival in Ljubljana, which this year hosts the closing event of the large-scale European multiyear project Create to Connect -> Create to Impact (CtC -> CtI). Last year during the nine-day festival, Labrović converted a closet into his temporary home and streamed his “hidden life” from there, during the corona pandemic. 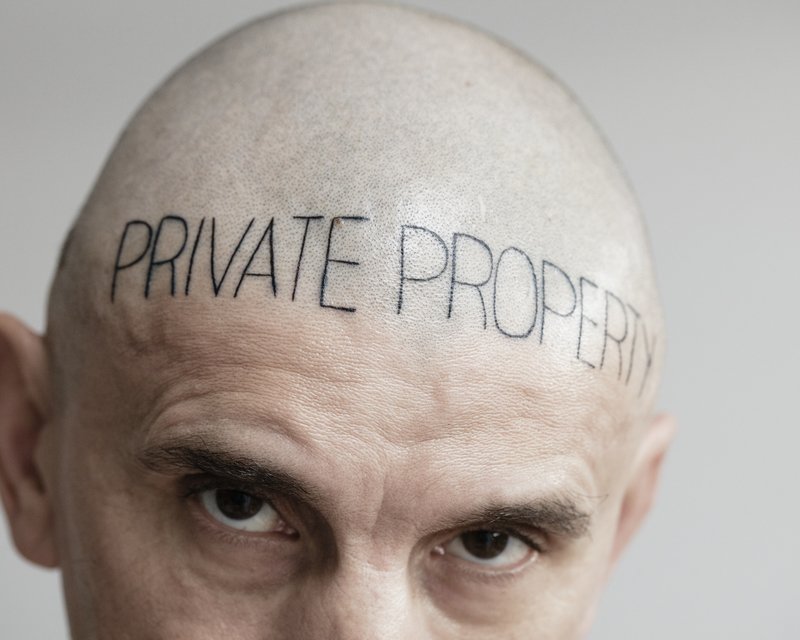 A few years ago, Labrović had the words “private property” tattooed on his shaved head to draw attention to the creeping danger of aggressive privatization. In doing so, Labrović strikingly echoes the project presented earlier this closing day by Jaka Železnikar (50). This Slovenian computer poet uses a steadily growing website to warn of the increasing privatization of natural areas around the world (see website www.private-property-access-forbidden.space). Confronting to see through visually organized data how much nature – after all owned by all of us – is falling into the hands of wealthy owners and thus being taken away from public ownership.

Like Labrović’s Walk Words, Private Property – Access Forbidden is one of the many European projects created with the support of Create to Connect -> Create to Impact. All of these initiatives are about “creating impact on society, through change, innovation, empowerment and emancipation,”
according to the network of organizations behind CtC -> CtI (see: www.ctc-cti.eu). These are ambitious words, but CtC -> CtI is not leaving it at rhetoric. In all kinds of creative ways, through publications, performances, debates, radio programs, performances, art projects, installations and expert meetings, they are investigating what can be understood as ‘social impact’. How do you define this concept? What role do politics play, what role public space, residents and their social environment? How do artists position themselves and how innovative and open do organizations position themselves? Moreover, how do you measure ‘impact and empowerment’ and what is the long-term effect? All relevant questions to avoid the social impact of art projects is just hype around a magic word or meeting fund criteria. 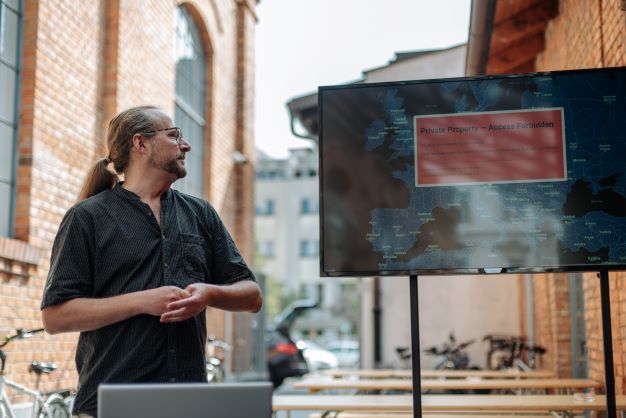 “At its core, it always has to do with taking responsibility for problems in our environment and daring to make lasting and deep, personal connections between artists and audiences,” stresses Alma R. Selimović (42), development director and fundraising manager of Bunker and one of the two coordinators of CtC -> CtI. ‘We encourage ourselves and everyone in our network to do exactly what seriously impacts society. What that is varies from country to country and from organization to organization. But it’s about solidarity at all levels. And that’s a time-consuming process.’

Words is one of the series of performances presented by the 25-year-old Mladi Levi (Slovenian for “young lions”) at this final event of CtC -> CtI. Over 120 projects have been realized in Europe in recent years – despite corona restrictions – by this international network of fifteen cultural organizations. CtC ->CtI is a continuation of the CtC project that started in 2012 as a joint effort of thirteen European partners to realize powerful and sustainable connections between (performing) artists, audiences, cultural organizations and scientists. New audience groups were reached with all kinds of art initiatives. In the continuation of CtC to CtI in 2018, the network partially renewed itself (a small number of partners stopped, five joined, see: ctc-cti.eu). The focus was shifted from audience building to creating impact. 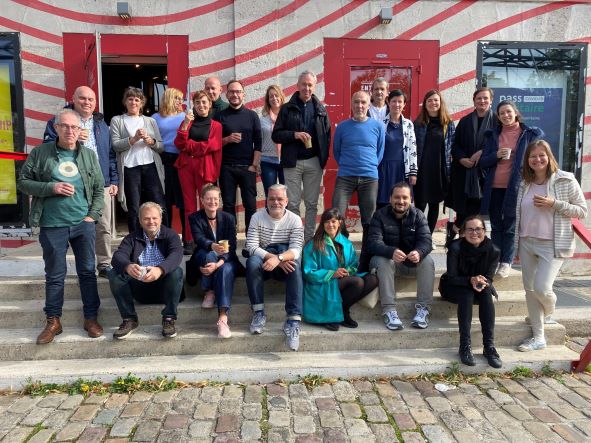 CtC -> CtI calls explicit attention to the influence and value of art for society, by studying its broad, multifaceted development through the prism of social change, emancipation and empowerment. Despite the corona crisis – or perhaps even because of it – international cooperation has produced many exciting insights, knowledge, methods and different art forms – all participants agree. Even if it was not equally easy to keep the engine going via zoom sessions. Fifteen organizations participated actively, including large institutions such as Theater Rotterdam and Noorderzon Performing Arts Festival in the Netherlands, BIT Teatergarasien in Bergen/Norway and Culturgest in Lisbon/Portugal, as well as small pioneers such as AltArt in Cluj-Napoca/Romania and Bunker in Ljubljana, Slovenia.

The latter, as a “Slovenian non-profit organization for the realization and organization of cultural events (such as contemporary theater performances, dance performances, workshops and educational programs)” within the network, has been both penning and leading CtC-> CtI in recent years. Culturgest in Lisbon will take over that torch when the follow-up project under the name Create to Permeate also takes place.

Looking back they all say: a European network on social and artistic impact stands or falls with the commitment of people, who are well embedded in an environment; without contacts you have no impact and cooperation is not done with organizations but with dedicated people. They are there, as the closing conference proved, for which participants from Slovenia, Portugal, England, the Netherlands, Romania, Norway, Croatia, Belgium, Italy and the Czech Republic traveled to Ljubljana to see performances, contribute to debates and walk through the center of Ljubljana as demonstrators. Among other things, they saw a confrontational testimony from Chile: the interdisciplinary project Mutilated, in which the Chilean collective Cuerpo Sur (consisting of actress and filmmaker Ébana Garin Coronel and theater director Luis Guenel Soto) used banging hammers and rattling grit in an ominous darkness to draw attention to the hushed-up stories of victims who paid a high price for their participation in the 2019 student protests: they lost most of their sight due to heavy-handed police brutality that crushed the social uprising. 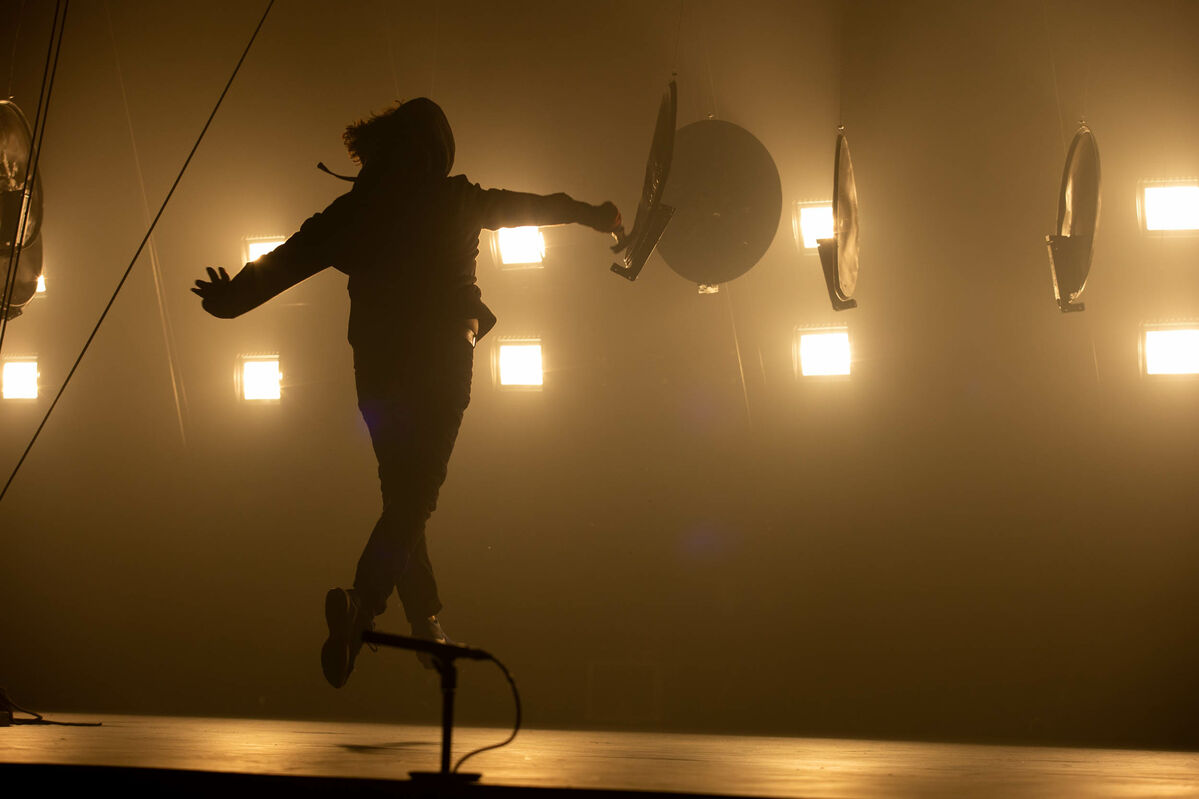 BOOK: Social Impact in Arts and Culture – The Diverse Lives of a Concept 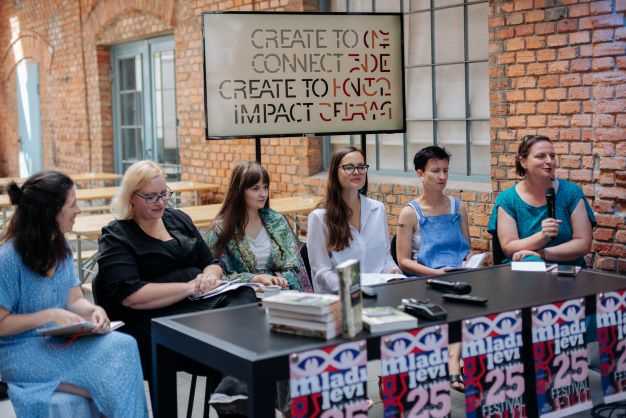 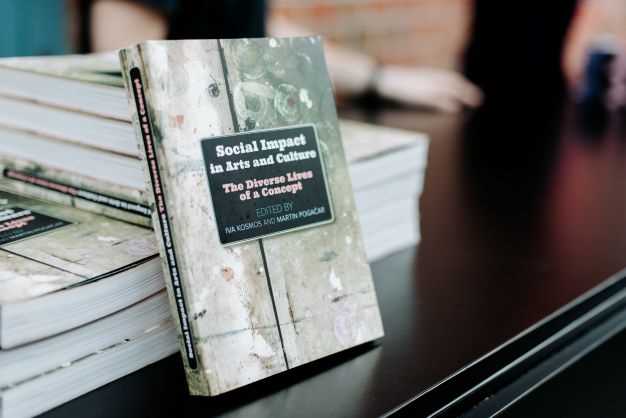 One of the most tangible outcomes of CtC -> CtI is the beautifully designed, in-depth book Social Impact in Arts and Culture – The Diverse Lives of a Concept, presented at the closing event in Ljubljana. In 15 essays, writers raise provocative questions such as the differences between the historical origins of the concept of “social impact” and the many meanings in which the term is used today, what role socially-active art plays in the revolt against the dystopia of neoliberalism and how with medium of interactive radio can smartly contribute to community building. It also elaborates on the criticism that (temporary) artistic community projects may unintentionally contribute to the political remediation policies of neo-liberal governments. They first make drastic cuts in social welfare by cutting back on services, after which they set up subsidy pots for artists so that they can camouflage the gap with incidental projects aimed at the participation of affected citizens. Community projects are stimulated precisely where crucial social services have disappeared. Do artists not thereby confirm the social hierarchy in a society? What meaning do exclusion and inclusion acquire then? Can the socio-political gap between the powerful majority and the excluded minority be bridged with art initiatives? And what about the participatory theater techniques of The Theater of the Oppressed – a theory developed by Augusto Boal, in which passive audiences do not exist?

Coordinator Alma R. Selimović summarizes with a smile the past years around the special European cooperation within CtC -> CtI. ‘Of course corona had a big impact and a number of projects were delayed because of this. But Bunker always honors fair working conditions in the workplace so we were careful with this as well. When artists needed more time to complete projects due to complex circumstances, we allowed them to do so. We learned indescribably, suffered a little and had more than enough fun.

She stresses that the strength of the network is the globalizing cooperation of all the participating countries, but that the strength of each initiated project lies precisely in a thorough local embedding. “There is no one method or toolbox to generate social impact. Every artist, every organization has to invent its own wheel. But you can learn from each other.” For example, it turns out that multidisciplinary and documentary projects are often highly effective because they have more hooks to claim their presence in the public discourse.

Mark Deputter (61), general and Artistic Director of Culturgest in Lisbon (and before that of Stuc in Leuven and Teatro Maria Matos) defends the unexpected, individual and intimate side of the concept of social impact: “Art can make you look at the world from a different perspective. We are actually always in production or organizational mode. We mainly look at practical matters. But precisely impractical aspects impress your soul and influence the way you view the world.’ Culturgest therefore wants to reach as many new audiences as possible to introduce them to unique aesthetic experiences. ‘The performing arts lend themselves perfectly to daring to look catastrophe in the eye through a new window in a concentrated way. Therefore, we are developing an intensive program on a wide range of issues in the fields of art, science, politics and society, in close cooperation with artists, scientists, universities and other civil society organizations. Themes we continue to explore include: migration, cultural diversity and decolonization, gender and, last but not least, ecology and climate change.