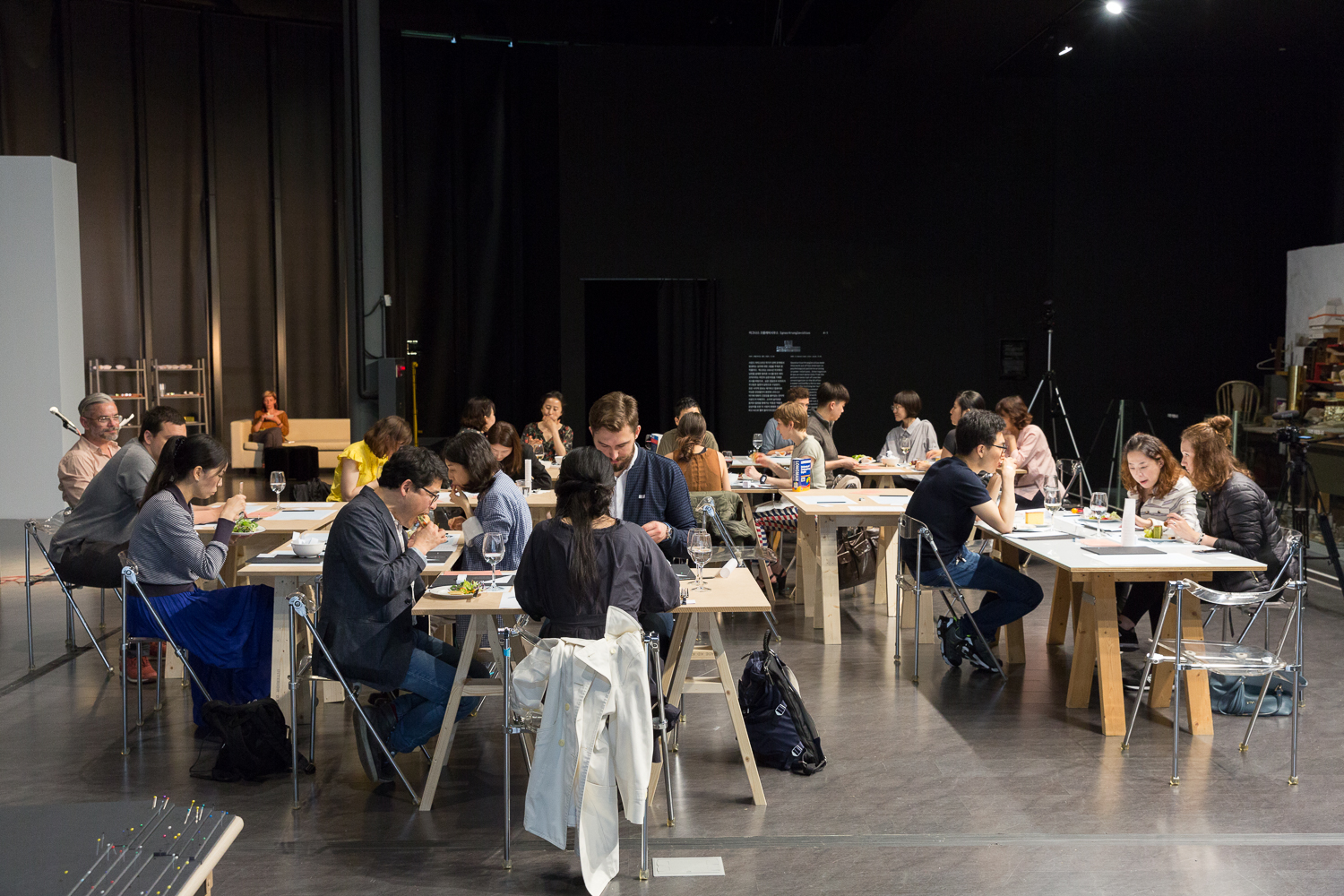 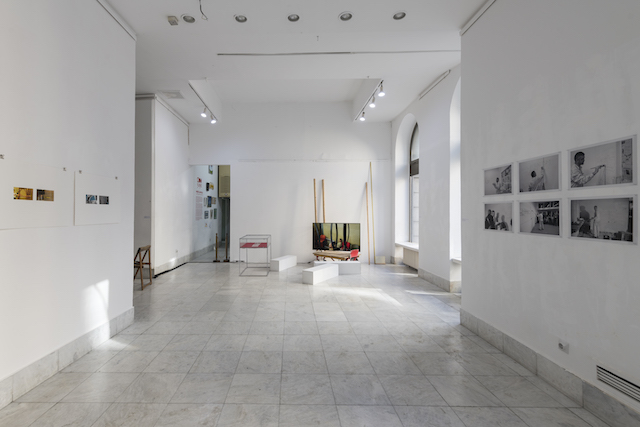 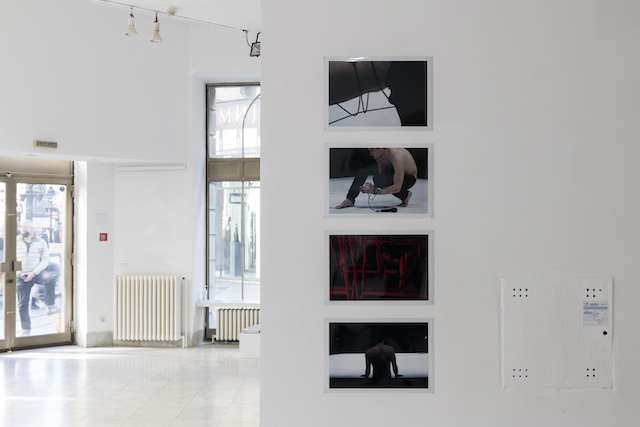 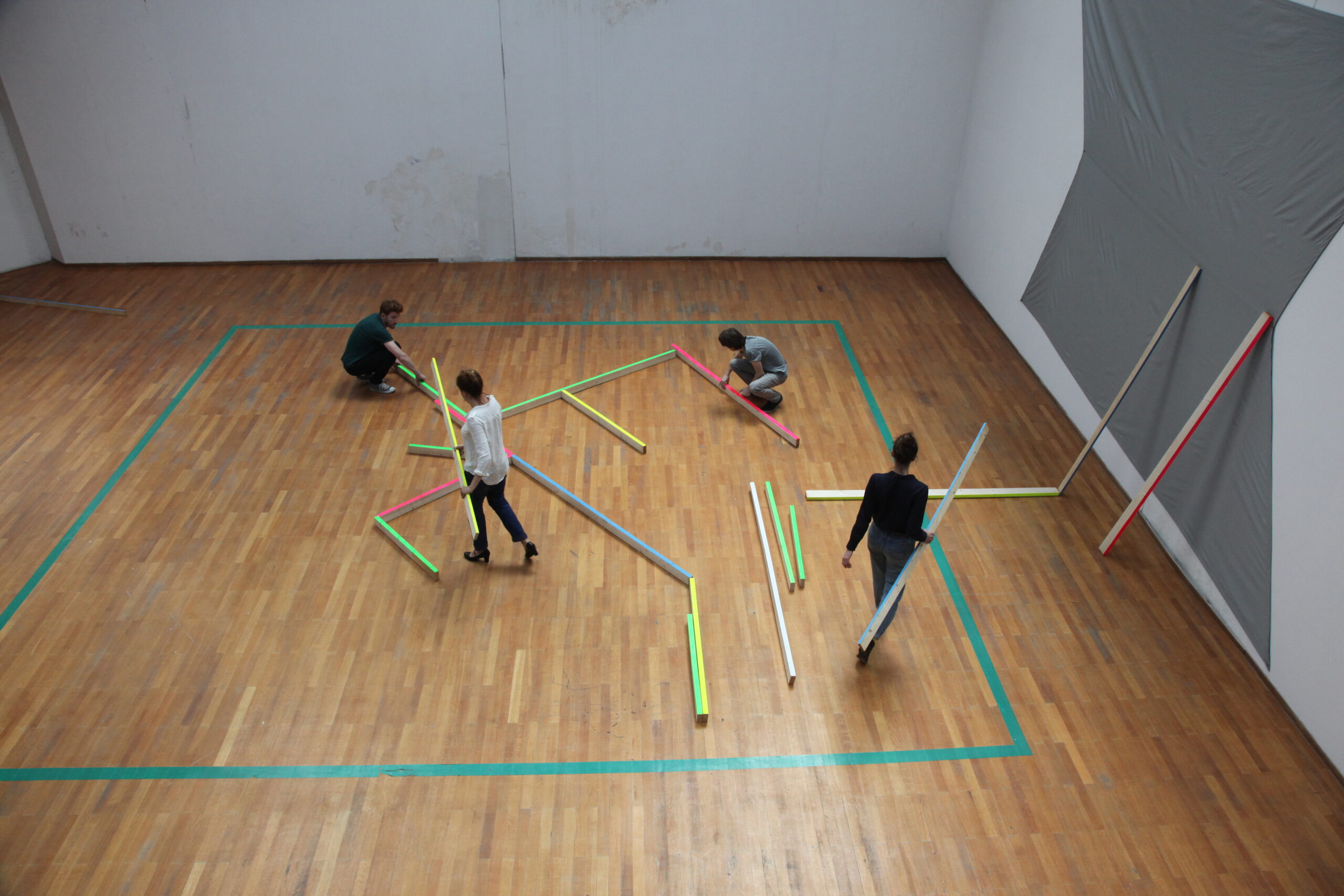 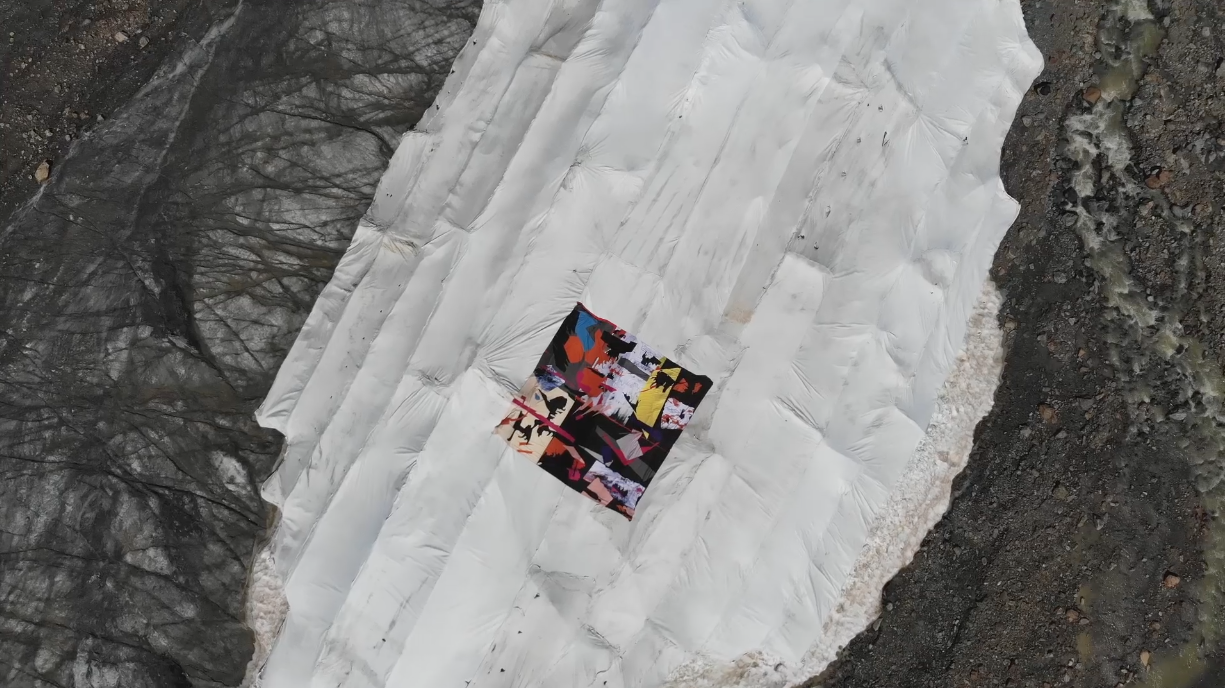 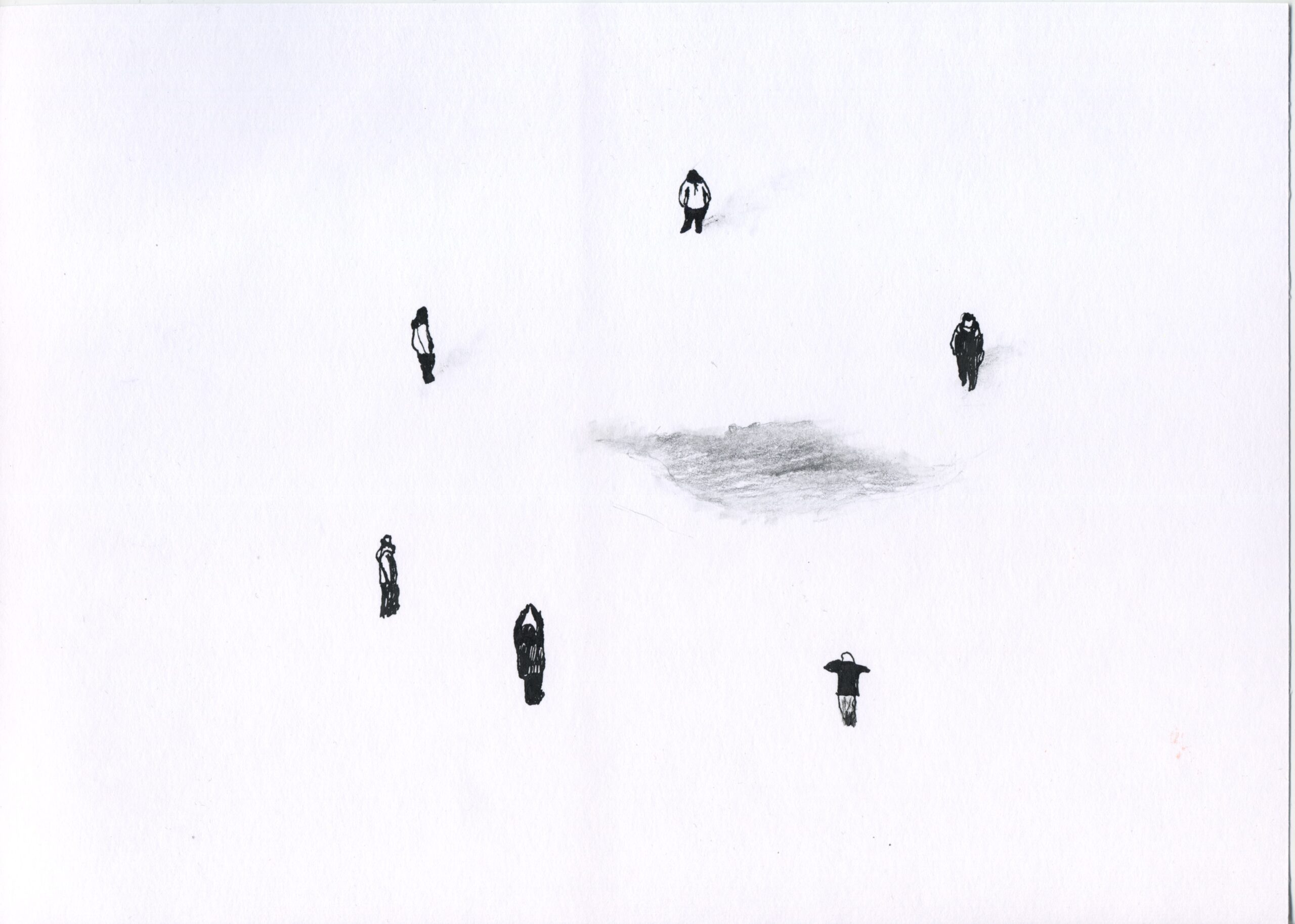 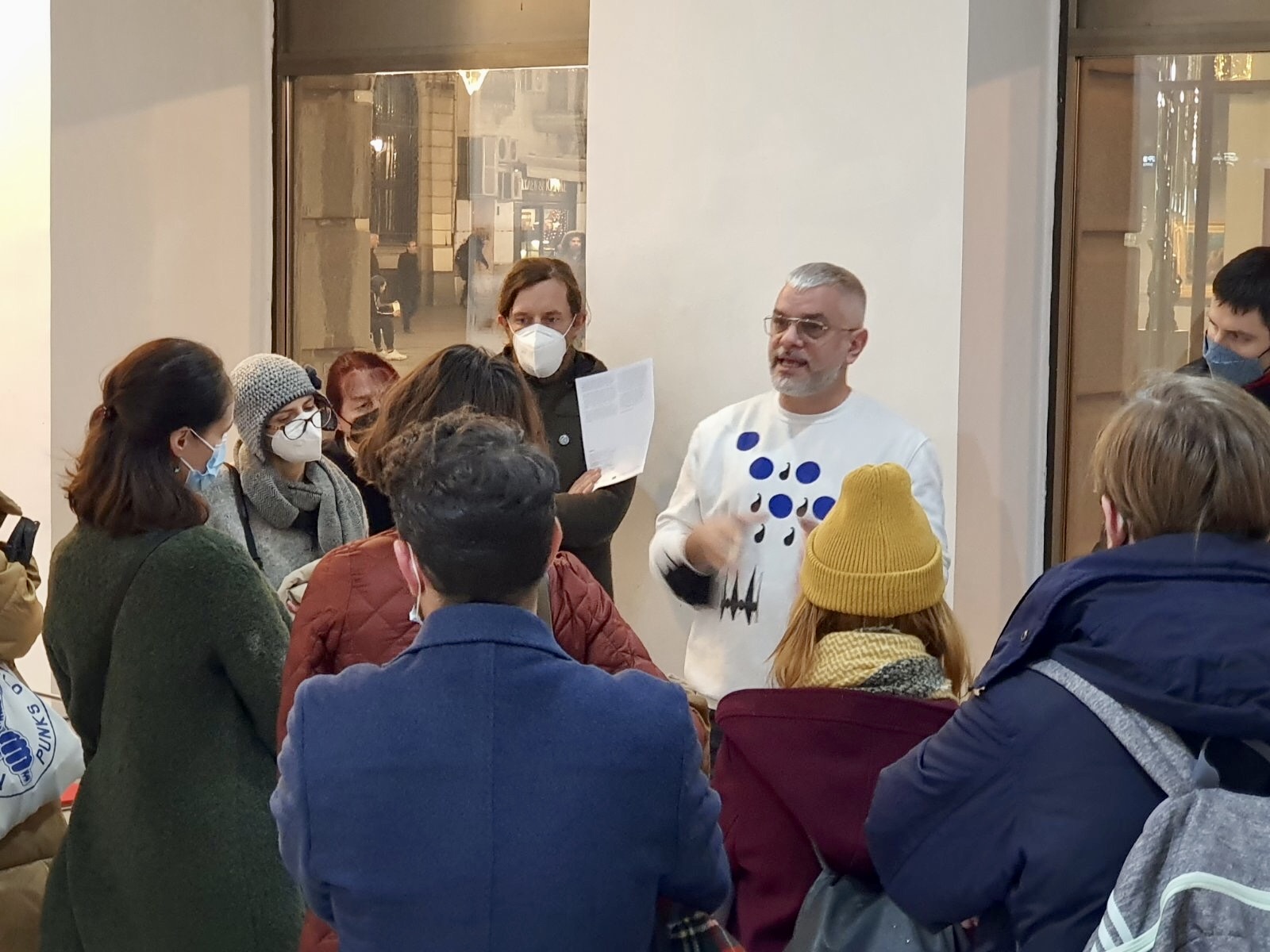 When we worked on conceptualising the exhibition with our curator, we decided to present a selection of pieces we worked on together, that we developed by ourselves, as well as works that involved others as co-authors, in various ways and collaborative constellations: other artistic positions, works, conceptions and reflections on images, performances, texts, spaces, and various artistic modes of expression. Thus beside us, the exhibition also brings together the performance group BADco. artist Tina Gverović, writer Goran Ferčec, actor Stipe Kostanić, artist and graphic designer Katarina Popović, and actress Sena Đorović. By reflecting on the exhibition as a format, we sought to perform a view of practice as the sensitive, living tissue of artistic communication and continuity in exchanges of ideas, rather than their alienation and petrification.
– S.I. and B.Đ.

‘Gathered’ is an exhibition about a collaboration that has its beginning, continuity, that is always in process, juggling accumulated knowledge that was, is, and will be in relations outlining the scene(s) in local, regional, and much broader contexts. It would be simple enough to say that it reflects and presents the past work of Siniša Ilić and Bojan Djordjev and thereby also the scene/scenes, but that would amount to a banalisation that would deprive us of those more subtle threads and details that, together, constitute the mosaic of ‘Gathered’. The exhibition does not present a closed, well-rounded whole, or a strategic selection of the most representative works, but conjures repressed, current, and at the same time future reflections of phenomena, things, and systems. Throughout its three parts – EXTERIOR, INTERIOR, PAPER – and different media and formats, what keeps appearing is the body/ies: congregating, wondering, learning, sweating, working, loving, exposed, erotic, anxious, exhausted, active, elated, in construction, political. It is always active and occupying a certain relation.

The conceptual focal point of ‘Gathered’ is the work ‘Orientation in 100 Revolutions’. A digitally printed image on a piece of textile covering 100 square metres shown at the 2020 Spring Exhibition ‘Where Does the Future Begin?’ served as a reminder that changes and different systems and worlds that might oppose the crises that capitalism produces are indeed possible. It served as a sort of stage set, not only for the performance that constitutes an integral part of this work, but also for the entire setting, organisation, production, and politics of that exhibition at Cvijeta Zuzorić Pavilion of Art, mounted and staged at a time of great crisis and fear in the spring of 2020. A few months later, the same work was resituated in a quite different context, but actually not entirely different. The huge canvas of ‘Orientation in 100 Revolutions’ was mounted in the EXTERIOR, on an Alpine glacier in Tyrol that is melting due to climate change, juxtaposing images of working and fighting people, as well as abstract contours of revolutions with a landscape suffering a transformation due to the negative impact of a system that seemingly has no alternative.

From there, a glacier in Tyrol, the exhibition’s dramaturgy takes us to another EXTERIOR, an intervention and performance by BADco. in the environment of Grobničko polje near the Croatian city of Rijeka, a place where nature meets infrastructure, including an airport, a motorsport racetrack, and a motorway, and then to a third EXTERIOR, in Dubrovnik on the Mediterranean coast, a landscape shaped by tourism and commodification of the coast, whose hinterland tells stories that are not so dazzling or pleasant.

From the EXTERIOR, the exhibition takes us into the INTERIOR, to institutions, leading us through a museum under renovation, the storage rooms of another museum, a theatre and performance academy. From there, we take a dive into the manifold possibilities of PAPER, a segment of the exhibition conceived as a discussion, with an experimental, documentary, and debating character. Upon exiting the gallery, the exhibition is not over, but continues in the form of a fragment from an audio-environment cruising performance.

In each segment, the body is that which gives rise to utterances, anticipations, detections, speaking up, loud silences, and gestuality, which is never final, but always calls for new, as yet undiscovered possibilities and struggles.
– M.D.

Siniša Ilić, a visual artist who is also active in the domain of the performing arts, uses various media to address social tensions and mechanisms. Bojan Đorđev is a theatre director whose practice also includes authorial projects tackling issues concerning the heritage of socialism and the economy of capitalism. Ilić and Đorđev have collaborated in a wide range of artistic and research projects. Also, they were among the co-founders of TkH – Teorija koja hoda (Walking Theory, 2001–2017), an art and theory platform. Along with Maja Mirković, they co-curated Scene Work Ahead, Serbia’s exhibit at the 2019 Prague Quadrennial of Performance Design and Space.

Mirjana Dragosavljević, an art historian and independent curator, active mostly in the fields of contemporary visual art, dance, and performance. She founded the platform Stereovizija. She is a member of Stanica/Station Service for Contemporary Dance and the Serbian chapter of the International Association of Art Critics – AICA Serbia. Currently she serves as the coordinator of the Independent Cultural Scene of Serbia Association.

Production and organisation: ULUS and United Artists Labour
Support: Ministry of Culture and Information of the Republic of Serbia and the Creative Europe fund of the European Union, through the Create to Connect – Create to Impact project
Technical support: Museum of Contemporary Art Belgrade